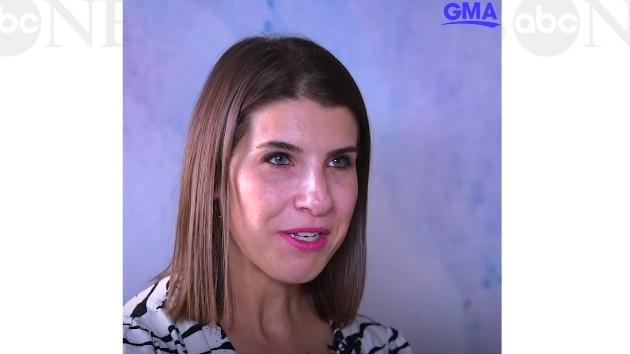 (NEW YORK) — When Rachel Blumenthal decided to start Rockets of Awesome, her data-driven children’s clothing brand, she was already a seasoned entrepreneur.

She founded her first company at 23 years old.

It was 2003 and Blumenthal was working in the public relations at Yves Saint Laurent. Blumenthal, a lover of arts and crafts, was wearing a homemade ring one day that caught the attention of editors from Lucky magazine, with whom she worked.”They said, we want to feature you as an up and coming designer. And, you know, opportunity presented itself. So I said, okay,” Blumenthal told ABC News’ Rebecca Jarvis on an episode of the “No Limits with Rebecca Jarvis” podcast. She became an accidental founder and the feature set her off on her entrepreneurial path. She named her new brand Rachel Leigh and found an old friend from Hebrew school to make her website. As the brand grew in popularity, and with the support of her husband, Warby Parker founder Neil Blumenthal, she eventually left her job at YSL to pursue her business full-time.

At its height, pieces sold in more than 300 stores and it was named one of Oprah’s “Favorite Things.” She eventually licensed to GlamHouse in 2011 and decided to open a new chapter in her career.”After licensing my jewelry company, I would basically sit at a desk every day and research and come up with really bad ideas. And I’m sure they would be good ideas for somebody, but they weren’t ideas that I was really passionate about,” Blumenthal said.At the time, Blumenthal had just had her first child. “As I would talk about my really bad ideas, I would talk about the frustration and the challenge of having a new baby and not knowing what products to buy,” she said. That frustration became her next big idea. She launched Cricket’s Circle in 2014, an online baby registry and content platform to help new parents shop better. Blumenthal describes it as a “cliff notes for what to buy when you have a baby.” The site gave three recommendations per category, and an algorithm helped to sort and filter recommendations based on the customer and their lifestyle.It was this company that led to the idea for her latest venture, Rockets of Awesome. Blumenthal decided to pivot. “[With Cricket’s Circle] What we kept running up against was that there were just not very meaningful monetization opportunities that were going to enable us to build a business of the scale that was really the vision and what I was really excited about,” she said. Her new idea centered on children’s clothing. She was personally frustrated with how quickly she needed to replace clothing for her kids. “The volume for which I have to replace is tremendous, and I spend way too much time finding cute stuff that isn’t expensive. And that was the moment where we really saw this bigger opportunity. … But it was a really scary, pivotal moment, both as a leader as well as for the business, because it really forced us to make a big move,” she recalled. It took 12 months to go from her “aha” moment to launch Rockets of Awesome in 2016. The company curates clothing for a child based on what they like and don’t like, delivered to the customer’s doorstep. Blumenthal has raised more than $49 million, including a recent $12.5 million investment from Foot Locker earlier this year.The company also boasts celebrity investors like Gwyneth Paltrow and Serena Williams as well as seasoned venture capitalist Kirsten Green, founder of Forerunner Ventures. When Blumenthal reflects on the worst advice she never took, it was about the name of her company. “A lot of people didn’t like our name, Rockets of Awesome, in the beginning,” she said. Critics of the name said it was too long and too hard to use for a social media handle or a website domain, but Blumenthal believed in it. “I just had such confidence in that moment, I just felt it in my gut that, that was the right name, and knowing that, yeah there might be points where it is challenging … the benefits of this name, that it’s very original and unique and makes every single person smile would far surpass not doing it,” she said. She added, “I loved how unexpected and how different it was and I just believe that in a world where there’s so much of the same, there’s tremendous value for doing what’s different.”