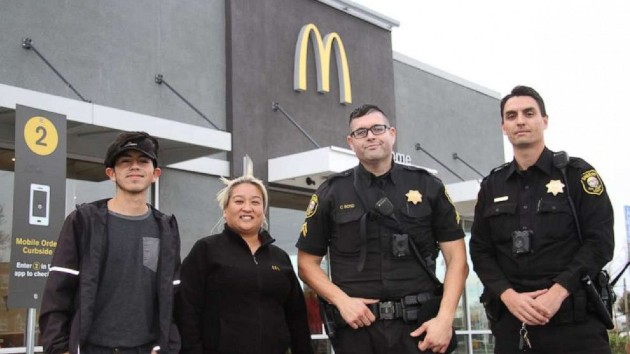 (LODI, Calif.) — Employees at a California McDonald’s became servers-turned-saviors after coming to the rescue of a woman who indicated she was in danger while at the drive-thru. A woman walked into the Lodi, California, McDonald’s on Christmas Eve. She asked employees to hide her from a man with whom she was apparently traveling. She said the man had threatened to kill her, according to Los Angeles ABC station KABC-TV. The woman gave the employees a license plate number, and the workers told her to hide in the restroom.When she emerged from the restroom, she went to order at the counter and a man came up to her demanding that she order from the drive-thru window.At the window, the woman mouthed the words “help me” to the employees. The employees managed to hold up the drive-thru line until the police showed up.Police arrested Eduardo Valenzuela, who was with the woman, after they discovered he had been violent with her in the past, according to information posted on the San Joaquin County Sheriff Office’s Facebook page.Valenzuela “told her to take him to visit his family and threatened her life, stating he would use a firearm. A firearm was located in the trunk of the vehicle (stolen out of state),” the sheriff office’s post stated. Valenzuela was booked in the San Joaquin County Jail for criminal threats, stolen property and felon (prohibited person) in possession of a firearm. That McDonald’s franchise and its employees are part of a “Safe Place” program, according to The Record. The program includes 30 McDonald’s locations throughout San Joaquin County. Employees, managers and supervisors are trained to help those seeking aid, particularly domestic violence and human-trafficking victims. Copyright © 2019, ABC Audio. All rights reserved.

3 cases that hint at Amy Coney Barrett’s views on policing
Woman charged with attempted murder for driving through crowd of competing protesters
What America owes: How reparations would look and who would pay
Police veteran among 2 officers injured after violent incident at station
Woman charged with felony in Breonna Taylor protest hit-and-run
1st woman named Rochester interim police chief amid criticism over Daniel Prude’s death