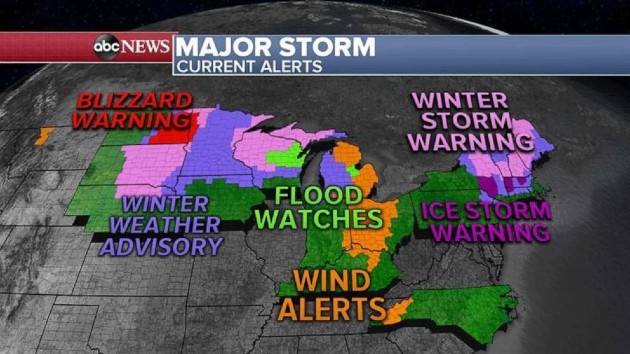 (NEW YORK) — A major storm system moving across the country since last week will bring a variety of treacherous weather conditions and heavy precipitation to the Midwest and Northeast on Monday. Over the weekend, an ice storm hit parts of the Upper Midwest, putting a thin layer of pure ice on everything from the Plains to the western Great Lakes and creating numerous car accidents. To the north, blizzard conditions raged over the weekend in the Dakotas, where winds gusted to 61 mph in South Dakota and up to 20 inches of snow fell in North Dakota. Seven reported tornadoes also touched down overnight in Mississippi. As the storm moves East, 20 states from the Dakotas to Maine are under flood, snow, ice or wind alerts. Almost 100,000 customers were without power in Ohio as they woke up on Monday morning.The storm system stretches from the Great Lakes all the way into the Northeast and the Gulf Coast on Monday morning. Ahead of the storm, there is rain, freezing rain and snow already falling in the Northeast. Icy roads are expected throughout inland Northeast during the day. The Interstate 95 corridor cities from Washington, D.C., to Boston will avoid ice, but they will be wet from rain. Snow continues on the back side of the storm from the Dakotas to Wisconsin with gusty winds creating blowing and drifting snow.Heavy snow will also continue in the western Great Lakes with blowing and drifting snow. In the Northeast, rain will fall Monday in New York City and Boston, but an icy mix and snow will spread from upstate New York into Maine.By Tuesday morning, the storm system will split and form a new low pressure off the New England coast. This will bring more snow to northern New England through Tuesday morning and into the early afternoon. Snow will end in the Plains, but it could move into Chicago and Michigan early Tuesday morning and create slick roads for the last day of 2019.More than 6 inches of snow is expected in northern New England over the next 48 hours, with ice accumulation up to three-quarters of an inch from upstate New York to southern Vermont and western Massachusetts.An additional 6 to 12 inches of snow is possible from Minnesota to Wisconsin and Michigan. Further south, Chicago could even see 1 to 2 inches of snow Monday night into Tuesday morning.

Ruth Bader Ginsburg to be honored with statue in Brooklyn, her birthplace: Cuomo
Trump calls on Senate Republicans to act ‘without delay’ on SCOTUS pick
Tropical Storm Beta may make landfall in Texas next week: Latest forecast
US sends Bradley Fighting Vehicles to Syria to boost security for troops following Russian encounter
Black man beaten by Georgia deputy speaks out after release from jail: ‘I feared for my life’
Federal judge halts changes to Postal Service, citing ‘voter disenfranchisement’