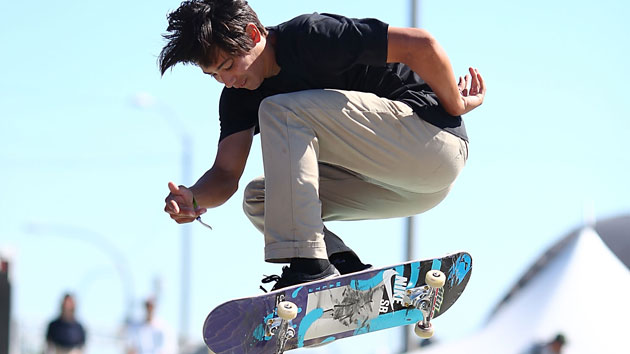 (NEW YORK) — When the Olympics come back next summer in Tokyo, fans won’t just get to see the return of their old favorite competitions and athletes.The 2020 Summer Olympics is introducing a host of new sports, including several trick-based competitions that have the athletic world abuzz. In addition to BMX park cycling, surfing and sport climbing, skateboarding — long the purview of neighborhood friends rather than the peak of international competition — is making its Olympic debut, and Americans Mariah Duran and Sean Malto are vying to be a part of it.”To go to the Olympics for skateboarding — for something that was just considered my hobby at one point — is super sick,” Duran, 23, who is ranked seventh in the world among female street skateboarders by World Skate as of November, told ABC News.”I would see my favorite athletes go to the Olympics, and it was always a dream to be able to one day go,” Malto, 30, told ABC News. “Granted, I never thought skating would make it there, but now there’s an outlet to do it, it’s pretty amazing.”The Olympics will feature both “park” and “street” competitions in skateboarding, and both Malto and Duran compete in street. Park is done in a space resembling an empty swimming pool, while street involves ramps and rails. In both competitions, athletes have three timed runs to do their own variety of tricks to post their highest score, similar to how halfpipe is done in the Winter Olympics.To get to Tokyo for the Olympics in late July and early August, the skateboarders will have to earn points in other competitions as determined by World Skate through May 2020, and then be selected by the United States to the representing team.This process is one of the many ways in which skateboarding is changing with its elevation to an Olympic level.”I was really excited and then kind of confused in a way,” Malto, who’s ranked 32nd in the world in men’s street skating, said of his reaction when it was announced to the Olympics. “Skating’s hard to wrangle in and organize, because it’s such an underground sport, in a way, if you even want to call it a sport.”Traditionally, skateboarding was more of a community-based hobby than an athletic competition. Making a career out of it largely involved filming skate videos to show off tricks and gain popularity — which hopefully would translate into sponsorships. In the ’90s, skateboarding’s competitive side grew between the existence of Tony Hawk and the start of the X Games, which led to an increased competitive structure over the last two decades.”Skateboarding started off as kind of a lifestyle before it was a sport,” Duran said. “Going into skateboarding, people never told you to do warm-ups or anything like that, you kind of just got on your board and skated to the skatepark and that was your warm-up.”Both Malto and Duran started skateboarding simply because their older brothers did, not because they were looking for a path to international glory.”The way I got into it was basically taking the city bus and going downtown and skating whatever I saw,” Duran said.When Malto first started getting free products from companies when he was 13, he said, “I thought that was the coolest thing, ever, in the world. I didn’t think there was a path from there.”About two years ago, Duran was able to quit her part-time job, and between major sponsorships from Adidas and Mountain Dew, now makes a full living in the sport.Even through competition both in the park and for sponsorships, Duran and Malto said skaters have maintained the community-based nature of the sport filled with friendships.”For girls, it’s still growing, so there’s a lot you can bond with,” Duran, who was the first woman selected to Mountain Dew’s DEW team, said. “We’re kind of more like an exclusive family. We don’t want to see anybody do bad — we’re mostly competing with ourselves.”Malto said he’s friends with the skaters he’s been competing against for the past 14 years, “but now, competition has gotten so intense from the Olympics that it hasn’t really broke anyone apart, but when we get to the event, we’re focused and trying to prepare.”With the Olympics comes increased scrutiny not just of the individual skaters, but of the sport itself — but Malto and Duran are confident skeptical first-time viewers will see the athleticism needed to compete.”When you’re jumping down 12 stairs over and over again and trying to flip your board and land back on it, and the ability to get yourself out of dangerous situations or pull off tricks in these high pressure situations, it’s a toll,” Malto said.”It takes so much patience and so many hours of constantly not landing your trick, just to land your trick and it be like 2 seconds of your life, and all those months, it was worth it,” Duran said.Although they’re excited for more people to learn about skateboarding, “there’s a lot more to skating other than the Olympics,” Malto said, noting there’s more to the sport than competition — like creativity, community and empowerment.”It changed my life when I found it when I was 10 years old, so hopefully it can do the same for somebody else,” he said.”I love skateboarding because at the end of the day it’s only you doing the trick,” Duran said. “And I love skateboarding because it’s so creative, there’s always something new brought to the table, there’s always a new way to do a trick, there’s always a new way to grow yourself.””I feel like it’s a never-ending road to fully master skateboarding because it’s so big and so creative, literally your limit is your imagination,” she added. “In that aspect, I’m super hyped to just continue growing and seeing how far I get.”Copyright © 2019, ABC Audio. All rights reserved.