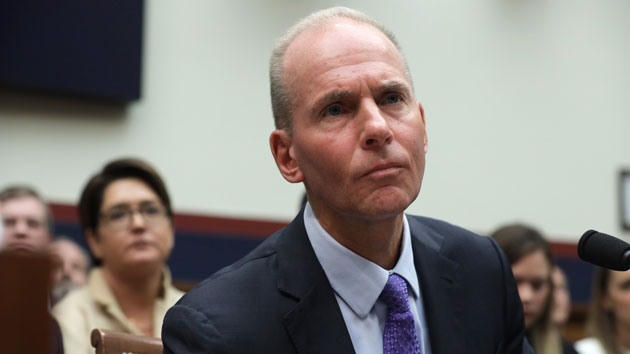 (NEW YORK) — Boeing’s recently ousted CEO could walk away with a multi-million dollar golden parachute that is about 270 times what the company is paying out to family members who lost a loved one in the Max 737 crashes.CEO Dennis Muilenburg was fired on Monday but may still walk away with $39 million in cash and stock options as part of his severance package, a source told ABC News. Some reports put that figure even higher.Meanwhile, those who lost a family member in one of the two deadly 737 Max crashes earlier this year could receive approximately $144,500 from a company fund of $50 million that will divided pro-rata between the 346 victims’ family members.Michael Stumo, who lost his daughter, Samya Stumo, in the Ethiopian Airlines crash, called the deaths “preventable” in a statement reacting to news of Mulienburg’s departure.”Now that it’s known what he and top Boeing officials knew, yet ignored, prior to the crashes, it has become clear how the company eroded in quality over the years,” Michael Stumo said. “Their focus on financial engineering led to the preventable deaths of my daughter, Samya Rose Stumo, and 345 other people in two tragic crashes.”He added that “ignoring the risk assessment of 15 future crashes that they admitted is unforgivable.”In October 2018, Lion Air Flight 610 crashed into the ocean just outside of Indonesia shortly after takeoff, killing all 189 people on board, including three children.In March 2019, Ethiopian Airlines Flight 302 crashed just minutes after taking off from Ethiopia’s capital, killing all 157 people on board, including eight Americans.The beleaguered fleet of jets has been grounded since March, and last week the company announced it was suspending production of the Max 737s starting in January.In a statement announcing the opening of the victim’s fund, Mulienberg said the 737 Max tragedies “weigh heavily on all of us at Boeing, and we continue to extend our deepest sympathies to the families and loved ones of all those on board.”The fund will provide $50 million in assistance to families of the victim, and the company pledged an additional $50 million to “address family and community needs of those affected by the tragedies.”In July, a man who lost his entire family in the Ethiopian Airlines crash testified before a congressional subcommittee, bringing with him photos of his wife, three children and mother-in-law who all died in the crash.”I stay up nights thinking of the horror that they must have endured,” Paul Njoroge told lawmakers.Boeing had announced the $100 million compensation fund in July just minutes before Njoroge’s testimony began, and the widower slammed the pledge at the time as “a press relations strategy to apologize to cameras.””Boeing has never reached out to families about the impossible sorrow and grief we will carry for our entire lives,” Njoroge said at the time. Copyright © 2019, ABC Radio. All rights reserved.