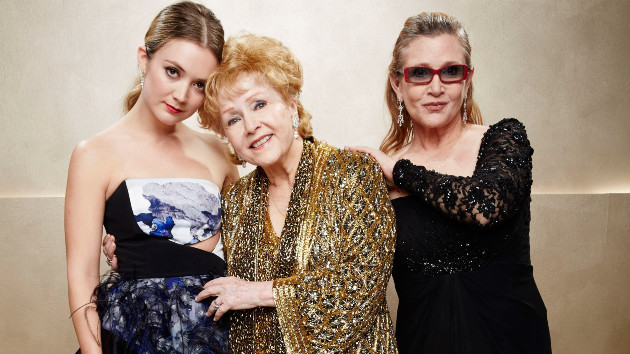 (LOS ANGELES) — The daughter of the late Carrie Fisher penned an honest message about grief during the holidays to her 1.3 million Instagram followers.Billie Lourd, who lost her mother and her maternal grandmother, actress Debbie Reynolds, three years ago on Dec. 27 and Dec. 28, respectively, wrote that sometimes the holiday season can be difficult for those who have suffered losses.”Sending my love to everyone who has lost someone they loved and is missing them a little extra today. I see you. It’s okay if everything ain’t all merry and bright. It can be a mix of all of it. And it’s all okay,” Lourd wrote.

She continued, “Feel all the feelings — the good and the not so good. Eat something delish they used to love. Put on one of their favorite songs. Tell a story about them. Cry about them. Call one of their friends you haven’t talked to in a while. Be kind and patient with yourself. Don’t grieve in silence. You’re not alone.”

Fisher was 60 years old when she died unexpectedly after suffering cardiac arrest; Reynolds died the next day from a stroke at age 84.Reynolds’ son, Todd Fisher, told ABC News at the time that it was his mother’s “destiny” to be with his sister.

Lourd appears briefly in Star Wars: The Rise of Skywalker, in theaters now. Fisher also reprises her iconic role of Leia Organa in the film, with the help of existing footage.

Breaking down the Supreme Court nomination, confirmation process
Trump’s leadership is ‘opposite of racism’: Kim Klacik on ‘The View’
Challenges aside, Emmy producers Reginald Hudlin and Ian Stewart say the show will be “great”
Tara Lipinski opens up about undergoing endometriosis surgery to break taboo of ‘hush hush topic’
Chrissy Teigen reveals the sex of her unborn baby
Tatiana Maslany joins the MCU as She-Hulk and Mark Ruffalo approves