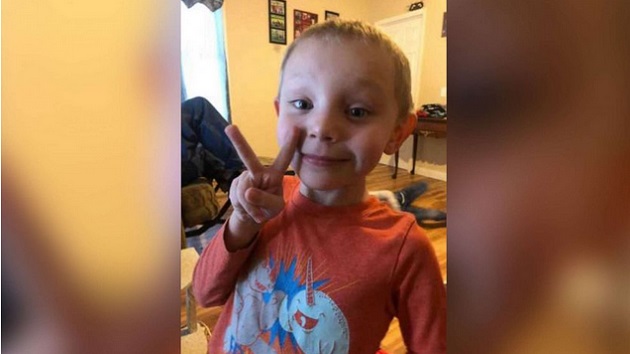 (SIX LAKES, Mich.) — A 5-year-old Michigan boy who went missing on Christmas Day has been found dead, officials said on Thursday.Beau Brennan Belson was last seen playing with other family members in front of a family member’s home in Six Lakes on Wednesday around 2:30 p.m. when they noticed he went missing.Belson’s family members attempted to find him in the area to no avail and contacted the Michigan State Police.Police said at a press conference on Thursday afternoon that Belson’s body was found in a pond. Authorities said Belson might have wandered away.Belson “was recovered from a pond adjacent to the home from which he was reported missing shortly after noon today by the MSP Marine Services Team,” police said on their official Twitter page Thursday.”Unfortunately, he was found in a pond and he is no longer with us. Our thoughts and prayers go out to the family,” said Lt. Commander Kevin Sweeney to a room of search and rescue volunteers at the Belvidere Township Fire Department.The Michigan State Police and Sixth District detectives will investigate the circumstances surrounding Belson’s death, said Lt. Dave Cope in a press release issued on Thursday.

UPDATE: The body of 5-year-old Beau Belson was recovered from a pond adjacent to the home from which he was reported missing shortly after noon today by the MSP Marine Services Team. The MSP Lakeview Post and 6th District detectives will continue with their investigation.

Get your first glimpse of Emma Corrin as Princess Diana on ‘The Crown’
Shannen Doherty on her battle with stage 4 breast cancer: “I’ve got a lot of life in me”
‘Saved by the Bell’ reboot coming to Peacock on November 25
Mother of a teacher who died from COVID-19 also dies from virus, family says
FAA administrator set to pilot 737 Max on Wednesday
Trump vs. Biden on the issues: Election security and integrity