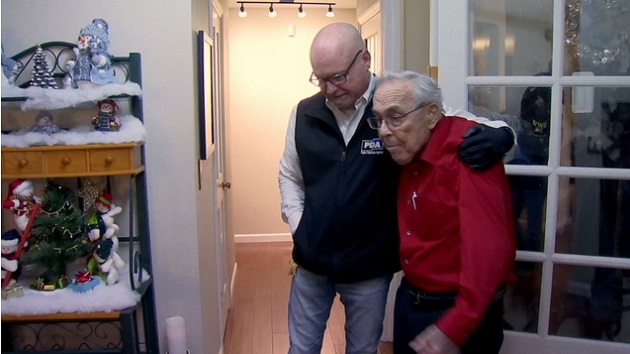 (FRESNO, Calif.) — A World War II veteran who was scammed out of thousands received a generous gift from strangers in an effort to pay it back.Floyd Smith, 92, of Fresno, California, was awarded a check for $12,472.60 on Monday thanks to hundreds of strangers who heard his story and donated to a GoFundMe page.The check came two years after Smith lost $10,000, money that he intended to put towards his retirement but instead loaned to a man who helped him get new windows for his home, according to ABC Fresno station KFSN.The man who received the money, Mark Gleizer, told Smith he was in financial trouble, according to KFSN.”So I thought he’s a nice guy, you know?” Smith told the station.When Gleizer didn’t pay the money back, Smith filed a claim in Fresno small claims court, according to court records.A judge ruled that Gleizer pay $7,630 to Smith, court records show, but Smith says he still hasn’t paid.The money from strangers, which was presented to Smith by KFSN, came as a welcome surprise.”Isn’t that amazing? So many good people in the world,” Smith told the station on Monday.

Watch the chilling first trailer for ‘The Craft’ reboot, ‘The Craft: Legacy’
Flynn lawyers, DOJ continue push to get case thrown out
Chrissy Teigen hospitalized for excessive bleeding complication during third pregnancy
Get your first glimpse of Emma Corrin as Princess Diana on ‘The Crown’
Ilyasah Shabazz says ‘The Godfather of Harlem’ is “great,” but didn’t show the “depth” of her father Malcolm X
Shannen Doherty on her battle with stage 4 breast cancer: “I’ve got a lot of life in me”