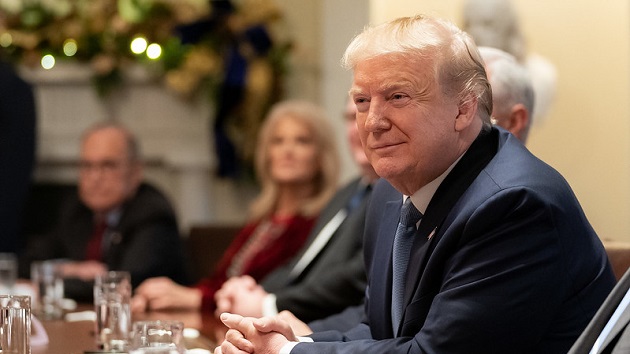 (WEST PALM BEACH, Florida) — President Donald Trump on Tuesday would not say if he planned to pardon his longtime friend and onetime campaign adviser, Roger Stone, who was found guilty last month of lying to Congress, witness tampering and obstruction.When asked by a reporter on Tuesday if he will pardon Stone, Trump — who was vacationing at his Mar-a-Lago club in Palm Beach, Florida — would not say whether he would — but did lament the treatment Stone had received.”Well, I hadn’t thought of it,” Trump began, when asked if he’d issue a pardon in the case. Stone remains free before he faces sentencing on Feb. 20.”I think it’s very tough what they did to Roger Stone, compared to what they do to other people on their side,” Trump said. “I think it’s very tough. I think it’s a very tough situation that they did something like that.”Stone was convicted in a case brought by special prosecutor Robert Mueller, with charges stemming from Mueller’s investigation into Russian interference in the 2016 U.S. election and Trump’s efforts to undermine the probe.He faces up to 50 years in prison according to the statutory maximum, but legal experts have told ABC News the actual sentence will likely be much lower.After Stone was convicted last month, Trump wrote on Twitter: “So they now convict Roger Stone of lying and want to jail him for many years to come.”Trump questioned why a slew of other rivals of his — from his 2016 Democratic presidential opponent Hillary Clinton to “Mueller himself” — had not also been convicted of lying.None of the individuals Trump mentioned then have been charged with lying to federal officials, or to Congress, as Stone was. One of them, the FBI’s former deputy director Andrew McCabe, has been accused of “lacking candor” in interviews under oath with federal investigators, according to a Department of Justice inspector general report.On Tuesday, Trump tried to downplay Stone’s role in his 2016 campaign.A longtime political operative, Stone has been a friend of Trump’s since the 1970s and has taken credit for persuading Trump to get into politics.He served as an adviser to Trump’s presidential campaign but left amid controversy in August 2015.”You know, Roger Stone was not involved in my campaign in any way other than the very, very beginning, before I think I, long before I announced, a little bit,” the president told reporters. “I’ve known Roger over the years. He’s a nice guy, a lot of people like him, and he got very … he got hit very hard.”Stone actually left the campaign weeks after Trump announced he was running — not before.