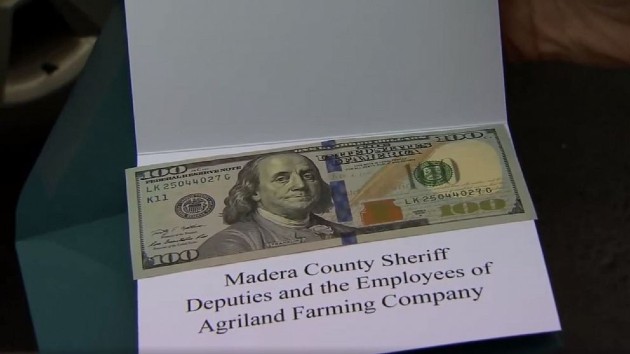 (FRESNO, Calif.) — Drivers in California’s Madera County were at heightened risk of being pulled over Monday — not because cops were looking to ticket them, but because the deputies were looking to distribute some holiday cheer. The Madera County Sheriff’s Department in Central California got a $5,000 donation to from a local business as part of the department’s “Operation Random Acts of Kindness.” The goal: distribute $100 in cash to 50 drivers before the end of the day.”The biggest thing is, you’re going to have to be active to find enough folks to give away $5,000 in 4-5 hours,” Sheriff Jay Varney told his charges before they hit the road Monday morning.Fresno ABC affiliate KFSN-TV went along for the ride as deputies pulled over drivers for minor traffic violations — then surprised them with a $100 bill instead of a ticket. “The reason I pulled you over is the registration on the vehicle is expired,” a deputy told Ryan Wood when he pulled over Wood in his truck. But instead of a summons, the deputy handed Wood a card from the Madera County Sheriff Deputies and the Employees of Agriland Farming Company, with a $100 bill tucked inside.”(It was) not expected, I can tell you that much, so I’m very appreciative,” Wood told KFSN after he received the surprise gift. “And it’s a good time of the year to get surprises like that, so it’s pretty awesome.” Department officials said the annual program, now in its fifth year, is a boon to community relations.”This is an opportunity for the deputies to go out and have positive interactions with the community, and it really helps us build relationships with the community,” said Madera County Undersheriff Tyson Pogue. By the end of the day, the department’s Facebook page was filled with video clips of drivers reacting with shock and surprise — several of them crying — when presented with the gifts.”Deputies primarily have contact with citizens when something stressful or bad is happening,” Sheriff Jay Varney said on Facebook. “This annual giving event allows deputies an opportunity to interact with the public in a positive manner and spread some holiday cheer.” Copyright © 2019, ABC Audio. All rights reserved.