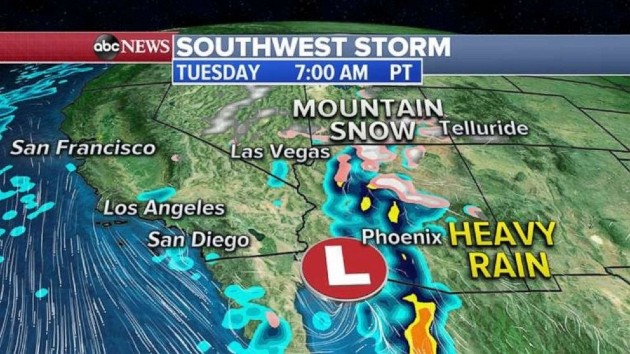 (NEW YORK) — Flights were backed up for Christmas Eve travelers trying to land at Chicago’s airports because of dense fog Tuesday morning.The ground stops at O’Hare and Midway airports were lifted around 9:30 a.m. CST.The weather caused about 50 cancellations and about 290 delays at O’Hare, and about 70 cancellations and 20 delays at Midway, according to FlightAware.But those finally landing in Chicago will be greeted with a special Christmas Gift — this year is forecast to be the warmest Christmas Eve and Christmas Day in Chicago in decades.The temperature is expected to reach 52 degrees Tuesday and 54 degrees Wednesday.The last time the Windy City had temperatures above 50 degrees on both Christmas Eve and Christmas Day was 1982.Southeast floodingIn the Southeast, a storm brought over 1 foot of rain to South Florida and up to 6 inches to coastal South Carolina.Flooding was reported from Charleston, South Carolina, to Miami.Some of the worst flooding was from Fort Lauderdale to Hollywood, where Fort Lauderdale’s daily record rainfall of 7.13 inches was broken.In downtown Charleston, a daily record rainfall of 3.62 inches was reported.The storm is slowly beginning to pull away from the Southeast coast, but Tuesday morning’s high tide could bring more flooding to downtown Charleston.A rainy Christmas for CaliforniaOne storm has already brought more than 3 inches of rain, mudslides and flooding to Southern California. That storm is now moving inland, bringing heavy rain to Arizona.Now a second storm is forming in the Pacific Ocean and taking aim at California.By Wednesday evening, the storm will arrive in coastal California with heavy rain continuing into Thursday.Rainfall could reach up to 3 inches around Los Angeles and San Diego, with flash flooding and mudslides possible.In the mountains, snow could accumulate to several feet and travel will be treacherous.