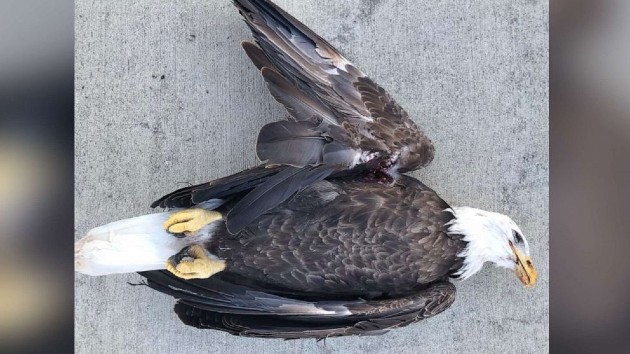 (NEW YORK) — Officials in Indiana are searching for the person who shot and killed a bald eagle. The bird was shot in Lawrence County on Friday, according to a statement from the law enforcement division of the Indiana Department of Natural Resources. The eagle was discovered alive on Saturday, but later died from the gunshot wound, officials said.Shooting a bald eagle is against the Bald and Golden Eagle Protection Act, which was a federal law enacted in 1940. Punishment includes fines and jail time. “A bald eagle is considered a raptor, which by both state and federal statute, they are protected,” Indiana DNR conservation officer Jim Hash told ABC News. “You cannot actually shoot at or harass any type of raptor.” A reward is available for information leading to arrests. The reward at a minimum is $200, but depending on the information and the charges filed, that amount could increase, Hash said. Anyone with information is asked to call the Indiana Conservation Officers’ Central Dispatch at 812-837-9536 or the anonymous tip line at 1-800-TIPIDNR.Copyright © 2019, ABC Audio. All rights reserved.