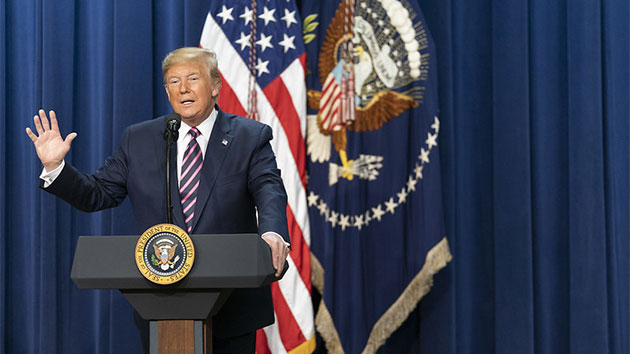 (WASHINGTON) — White House officials requested that aid to Ukraine be held around 1 1/2 hours after President Donald Trump’s July phone call with Ukrainian President Volodymyr Zelenskiy, according to newly obtained documents. While the Trump administration has yet to release a single document subpoenaed by Congress during its impeachment inquiry of the president, the administration was forced to hand over a second round of communications between two government offices that helped withhold $400 million in military aid to Ukraine. According to a rough transcript released by the White House, the July 25 call between Trump and Zelenskiy took place between 9:03 and 9:33 a.m. At 11:04 a.m., an official with the White House’s budget office, the Office of Management and Budget (OMB), Mike Duffey, sent an email to Deputy Secretary of Defense David Norquist, the chief of staff to Defense Secretary Mark Esper and the Pentagon’s chief financial officer, telling them to withhold the aid to Ukraine, the documents showed. “Based on guidance I have received and in light of the Administration’s plan to review assistance to Ukraine, including the Ukraine Security Assistance Initiative, please hold off on any additional DoD obligations of these funds, pending direction from that process,” the email from Duffey said, according to the documents. “Given the sensitive nature of the request, I appreciate your keeping that information closely held to those who need to know to execute direction,” Duffey’s email stated. The first announcement that the White House had decided to withhold the aid, which Acting Chief of Staff Mick Mulvaney said was at the direction of the president, came at a July 18 meeting between OMB and other officials. The meeting immediately sparked confusion and concerns from National Security Council officials and diplomats. This prompted a series of NSC-led inter-agency meetings, during which officials came to a unanimous conclusion that the security assistance should be resumed, according to several witnesses’ testimony in the House impeachment inquiry. Rachel Semmel, a spokeswoman for OMB, said in a statement on Sunday that it was “reckless to tie the hold of funds to the phone call.” “As has been established and publicly reported, the hold was announced in an interagency meeting on July 18,” she continued. “To pull a line out of one email and fail to address the context is misleading and inaccurate.” The documents, obtained Friday by the Center for Public Integrity via an order by a federal judge as part of a Freedom of Information Act request to the Department of Defense (DoD) and Office of Management and Budget (OMB), were heavily redacted, but they are the first pertaining to the aid holdup to be released by the Trump administration. The administration has refused to cooperate with Congress’ investigation and has prevented documents from being released and blocked administration officials from testifying. The details of the July 18 meeting were only known among officials and were not released to Congress or the public until the Washington Post first reported about it in September. A senior administration official said that the fact that Duffey’s email came 91 minutes after the Trump-Zelenskiy phone call concluded was coincidental and that the message was part of a weeks-long discussion between OMB and DoD over holding up the aid. OMB had been waiting on information from DoD about how it planned to distribute the aid, and on July 25, the budget office finally had enough information to finish the process to withhold the aid by placing a footnote on it in OMB’s system, according to the official. Duffey was notifying DoD officials that the process had reached that point, the official said. The official also said that Duffey requested the information be “closely held” because of the sensitive nature of foreign assistance and geopolitics in general, accentuated by the fact that just that day Ukraine had seized a Russian ship in the Black Sea. “This new round of documents isn’t enough,” Susan Smith Richardson, CEO of Public Integrity, said in a statement Saturday. “But they do reveal how quickly the White House moved to cut off military aid to Ukraine.” The White House declined to comment on these documents on Sunday.The documents also show that Trump first started inquiring about the aid as early as June, one month before the call, though the decision wasn’t revealed until a July 18 meeting between the OMB and other officials that the White House had decided to withhold the Ukraine aid. Mulvaney said the move was at the direction of the president. “The president has asked about this funding release,” Duffey emailed DoD deputy comptroller Elaine McCusker on June 19, just one day after DoD first publicly announced the funding. Duffey included a link to a news article about the announcement, suggesting it was the source of the president’s renewed interest.

“I have been tasked to follow-up with someone over there to get more details,” Duffey continues. “Do you have insight on this funding?” In another email chain a week later, titled “POTUS follow up,” Eric Chewning, a DoD official, continued the search for more specifics on behalf of the president.

“What was the funding used for?….who funded it? What do other NATO members spend to support Ukraine,” he asked.OMB head Mark Sandy had previously recalled a similar exchange in his testimony to the House Intelligence Committee.

“I heard the president had seen a media report, and he had questions about the assistance,” Sandy told the committee.

He testified it was Duffey who first communicated the president’s concerns to him on June 19. The almost $400 million of military assistance was ultimately held up before Trump’s infamous call with Zelenskiy, the contents of which were used as key evidence in the investigation into whether Trump withheld aid in an attempt to pressure Zelenskiy into investigating former Vice President Joe Biden and his son, Hunter. The possibility of a hold up when it was announced on July 18 immediately sparked confusion and concerns from National Security Council officials and diplomats. This prompted a series of NSC-led inter-agency meetings, during which officials came to a unanimous conclusion that the security assistance should be resumed, according to several witnesses’ testimony in the House impeachment inquiry. The emails released Friday also highlight legal concerns among OMB officials right after the July 25 call and reveal an almost immediate effort to involve legal counsel in the process. “Please share with your [Office of General Counsel] and advise of any concerns today,” Sandy asked McCusker just hours after the call.

There is no McCusker response in the documents released, though it is clear that lawyers from both offices corresponded on the topic.

“I understand our respective OGC’s connected this afternoon,” Sandy wrote. “I need to complete the apportionment this afternoon, so please let me know if you want to discuss before I transmit soon.” As the officials involved their lawyers, they also seem to have engaged in an effort to prevent the information from leaking.

“Given the sensitive nature of the request, I appreciate your keeping that information closely held to those who need to know to execute the direction,” Duffey wrote to several OMB and DoD officials the same day of the call.This effort could be seen as a violation of the Impoundment Control Act — a law which states that Congress must be alerted and approve of any shift in funds they have already appropriated — if the intention was to keep the information “closely held” from Congress, according to Public Integrity. Ultimately, the officials shared a sense of relief once the funds were released on Sept. 11, which they seemed to have thought would have put an end to the situation entirely. Duffey told McCusker he was “glad to have this behind [them]” just before he signed the apportionment on Sept. 11. Edna Falk Curtin, another OMB official, expressed a similar sentiment.

“Hope this is good news,” she wrote.