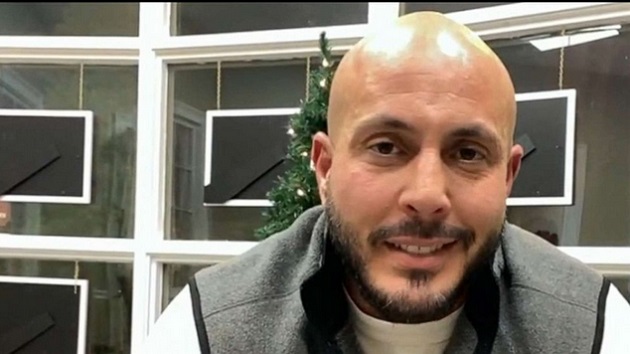 (BRIDGEPORT, Conn.) — When Connecticut police officer Carlos Carmo Jr. spotted a runaway SUV with no driver and two helpless passengers freaking out inside, he realized he had to act fast.He said mustered all his strength to stop it from jumping a curb and mowing down a group of teenagers on the sidewalk.The heroics that unfolded at the corner of Boston Avenue and Bond Street in a bustling business district of Bridgeport would be hard to fathom had they not been captured on security video.”We go through a lot of scenarios, but that’s not a scenario they teach us in the academy,” Carmo said on Monday in an interview on ABC’s “Good Morning America.” “That’s just one of those things where your instinct kicks in and you basically do what you got to do to keep these kids safe.”Carmo, a school resource officer, was standing in a crosswalk directing traffic around 2:30 p.m. on Dec. 16 as students from nearby Harding High School were leaving campus for the day.In the security video, a black SUV with no one at the wheel is seen rolling by Carmo and appearing to veer toward a sidewalk crowded with students.An investigation later determined that the vehicle had been parked on Boston Avenue when, for some unexplained reason, it accidentally slipped out of park, merged into eastbound traffic and began to pick up speed on the downhill slope with one person in the passenger seat and another in the back seat but no one at the wheel, according to police.”I was just thinking in my mind, ‘I got to find a way to stop this,"” Carmo recalled.Carmo said he started yelling at the students on the sidewalk to get out of the way as he began sprinting after the vehicle.”They all had headphones on and I was screaming at them,” Carmo said of the oblivious students. “They basically didn’t hear me. I don’t even think they knew what was going on until it was over.”Carmo, a four-year veteran of the Bridgeport Police Police Department, said that when he caught up to the SUV, he saw two terrified people, including an elderly woman, inside.The dramatic security footage shows Carmo grabbing onto the rear passenger-side door and opening it. Using all his might, the brawny cop is seen holding onto the door frame and bringing the vehicle to a halt.”My adrenaline basically kicked in at that point. I used my strength while dragging my feet along the ground … before the SUV could collide with anyone or anything,” said Carmo, who was treated at a hospital for minor injuries.”The people in the car as I was holding it and trying to stop it … were freaking out a little bit, they were screaming,” Carmo.No one was injured in the incident that left the two people inside the SUV with rattled nerves but relieved to be rescued by an officer who some are calling a real-life superhero.Bridgeport Mayor Joseph P. Ganim says he’s planning to hold a ceremony to publicly recognize Carmo’s “bravery, selflessness, and quick thinking in this emergency situation that could have been tragic had he not intervened.”