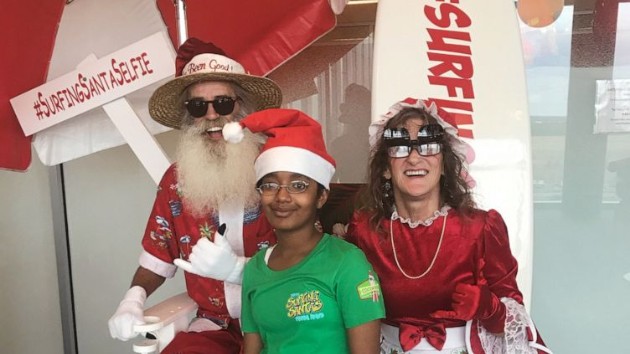 (COCOA BEACH, Fla.) — This Christmas, Santa is going surfing. On Dec. 24, hundreds of Santas will take the waves at Cocoa Beach, Florida, for Surfing Santas. George Trosset is the founder and CFO — chief fun officer — of the organization.”It’s gone from a little family day in Cocoa Beach into this huge Christmas celebration in downtown Cocoa Beach,” he told ABC News’ Good Morning America.It all started in 2009, when Trosset and his family traveled to their beach house dressed as Santa and his elves to go surfing. After a reporter from the local paper took a photo of them and placed it on the front page on Christmas Day, word started to spread. The next year, 10 people showed up. The year after that, 84 people showed up. The event organically grew so much that, eventually, 837 people arrived to surf while another 10,000 arrived to spectate. “I like to say Surfing Santa makes people smile,” he said.And they most definitely are. Not only are they spreading holiday cheer at the beach, but the Santas also traveled to AdventHealth, a hospital in Florida, to provide kids in critical condition some Christmas spirit. The group sets up a lifeguard chair with a surfboard and palm trees for children to take photos with during the holiday season. Deborah Webster, the research and analytics director for Florida’s Space Coast Office of Tourism, began organizing the event after spending many Christmases in the hospital.That’s because her daughter Charlotte, 14, started experiencing multiple seizures a day when she was just 8 years old. When Charlotte was taken to the hospital, she was quickly diagnosed with epilepsy. “The time that we’re there at the hospital, it just feels so surreal because I can remember being back in that same situation,” Webster said.Because Charlotte had a drug-resistant form of epilepsy, the treatment was surgery. For that reason, Charlotte and her family spent many holidays in the hospital. But after four brain surgeries and spending 17 days in a coma in the pediatric intensive care unit, Charlotte is now finally feeling better after battling the disorder her doctors — Dr. Ki Hyeong Lee and Dr. James Baumgartner — say can be addressed via surgery. Charlotte and her sister Anna Grace, 16, now help their mom coordinate the Surfing Santas’ visit to the hospital.”It’s a magical thing,” Charlotte told GMA.Webster and her family have been organizing the event for three years now. She calls it an out-of-body experience seeing kids, who are being treated with some sort of medicine, smile after seeing a Surfing Santa. “We’re on the other side right now and we’re able to essentially spread some joy for families that are there with there kids and in crisis,” she said. Keep an eye out for tons of jolly Santas taking to the ocean on Christmas Eve to spread more holiday cheer. “I’m thankful that surfing Santas has become what it has become,” Trosset said.