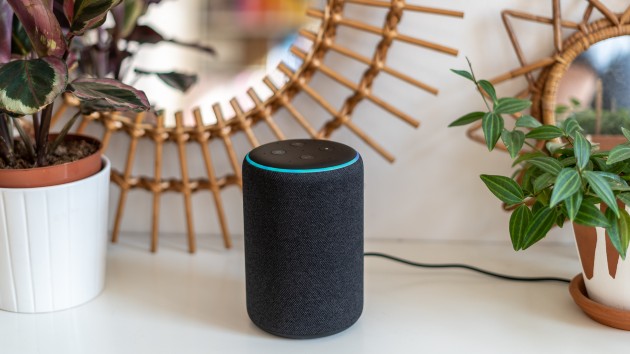 (NEW YORK) — Most kids tell Santa Claus what they want for Christmas, but some kids are now finding it more effective to just ask Alexa. In a story first reported by The Wall Street Journal, kids have been asking the Amazon device for presents this holiday season — and leaving parents with unexpected bills and packages. Zibby Owens, a mother of four and the host of a podcast called “Moms Don’t Have Time to Read Books,” says she learned this lesson first-hand after her son used her iPad and got ahold of the Alexa function.”I was sitting on the couch and my phone started buzzing with alerts over and over again,” Owens told ABC News’ Good Morning America. “And it buzzed so many times in a row that I was finally like — hold up — let me see what’s going on, maybe there’s some kind of emergency.” Owens said that her son, who was 4 years old at the time, easily ordered dozens of items.”I saw that he had placed all these different orders … and they had already shipped, they were en route, so I couldn’t cancel it,” she said. “And then the next day, box after box filled with all the toys he ordered [arrived].” Owens said her son was not allowed to keep all the toys and ended up giving some for friends’ birthdays throughout the year.Allison Tate, a mother of five, experienced the same thing when her daughter, Lucy, racked up a $300 bill on Allison’s Amazon account. “I thought it was a free toy website so I clicked on everything, I pressed add to cart,” said Lucy. “My husband was like, ‘What?"” said Allison. “And when I showed him the emails, he was like, ‘Cancel the orders!"” Allison, who decided to keep the ordered items, saved them for her daughter. “I kept them in a closet and let her have them once in a while,” said Allison. “For good behavior or a milestone or Christmas, we had some extra presents under the tree.”Many parents like Zibby and Allison, whose kids unbeknownst to them purchased items online during this time of the year, are warning parents to set up parental controls so the same thing doesn’t happen to them. Amazon said they have a number of methods to avoid racking up big bills. Below are some of their tips to add a layer of security on your devices:1. Set up a PIN number on Alexa devices that has to be spoken before a purchase can be made. 2. Turn off voice purchasing. 3. Delete the app. 4. Simply disable one-click ordering. 5. On Apple devices, set up fingerprint log-in or facial recognition before purchases can be made. Copyright © 2019, ABC Audio. All rights reserved.