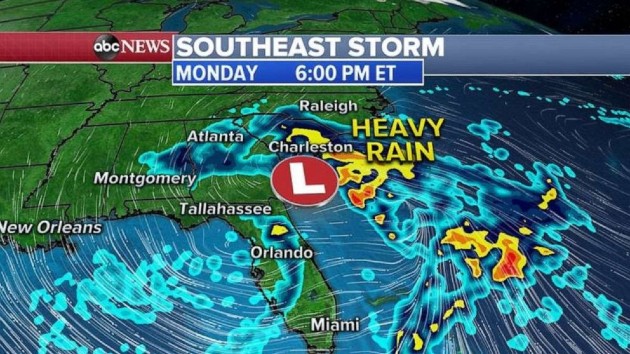 (NEW YORK) — As flooding and gusty winds slam the Southeast, Florida’s Fort Lauderdale-Hollywood International Airport temporarily closed Monday morning because of severe weather. The airport closed shortly before 4 a.m. due to severe rain and flooding, stopping travelers in their tracks as they rushed to reach their holiday destinations. Sections of the airport were not accessible and flights weren’t operational, airport officials said. Parts of the Fort Lauderdale area have been soaked with more than 1 foot of rain since Sunday.Flights were resuming by 6:30 am, though six flights were canceled and over 100 were delayed, according to the airport.That storm will slowly move through the Carolinas by Monday evening with drier conditions expected for Florida. Up to 5 inches of rain is possible in South Carolina through the next 24 hours.A rainy Christmas for CaliforniaA western storm is bringing very heavy rain to Southern California on Monday morning, including Los Angeles and San Diego, with some flooding possible.A flood advisory was issued overnight for the region.In the mountains of Southern California, some areas could see up to a foot of snow. In the Los Angeles area and San Diego, as much as 1 to 2 inches of rain is possible. Heavy rain will also spread into Arizona later on Monday and into the nighttime hours, with some areas seeing up to 1 inch of rainfall. Snow will spread into the southern Rockies from Utah to Colorado, where locally some areas could see more than a foot in the next 36 hours.Christmas thawOutside of the two travel trouble spots in the Southwest and Southeast, it will be a very mild, spring-like Christmas for most of the eastern U.S. Temperatures will reach the 50s close to Chicago and the 40s into the Great Lakes and the Northeast.