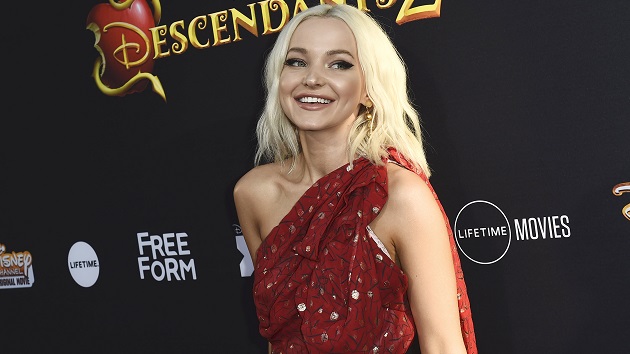 (LOS ANGELES) — The cast of Disney’s Descendants continue to heal from the sudden passing of co-star Cameron Boyce.  Dove Cameron recently paid tribute to him by getting a tattoo honoring the foundation he created.

The “So Good” singer detailed her late co star’s organization and the meaning behind her new tattoo in the latest 24 Hours with Vogue episode.

“I am getting my 11th tattoo today. I really do get them so often that this really is a day in the life for me,” she joked with a smile before revealing to Vogue what her new ink was going to be.

“I’ve settled on that I want to get a single needle. Either, like, a pistol or a revolver or some type of fire arm… but I want it to have either a single rose or a little bouquet coming out of it,” she explains, adding that she is anti-gun and pro-gun regulation.

She then goes into the deeper meaning behind the tattoo, “My friend Cameron passed away a few months ago and he had been starting this organization called Wielding Peace. He wanted to get influential people holding things that sort of looked like they were in the shape of a gun, but then it would be artistic or peaceful. He did it with a bouquet of flowers actually and I think that that’s really beautiful.”

Dove goes on to explain that “I’ve been trying to think of a tattoo to get for him since he passed and I just felt that this one was really appropriate.”

Armie Hammer calls separation from Elizabeth Chambers a “seismic event”
Biden calls Trump’s debate performance a ‘national embarrassment’ as he kicks off train tour
Kentucky AG Daniel Cameron granted 48-hour delay in release of Breonna Taylor grand jury recording
How climate change affects wildfires, like those in the West, and makes them worse
Jennifer Lopez to receive The People’s Icon honor at the 2020 E! People’s Choice Awards
‘Riverdale,’ ‘Charmed’ among shows halted due to lack of COVID-19 testing in Vancouver