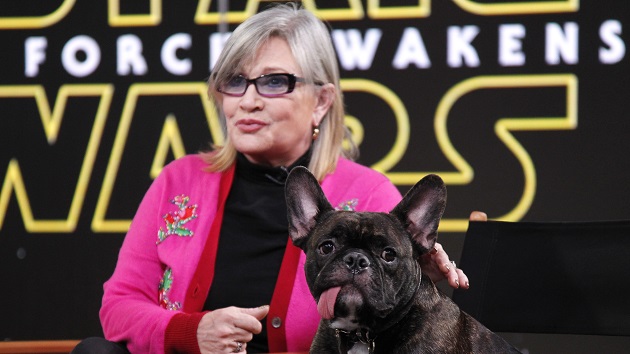 (NEW YORK) — It’s been three years since the world bid goodbye to Carrie Fisher, however, family and friends continue to find new stories featuring her sharp wit — which has led them to believe she isn’t completely gone.

Most recently, her brother Todd unearthed an eerily prophetic letter she wrote about death, in which he revealed that he found in mom Debbie Reynolds’ desk drawer. Todd read it aloud to the New York Post, who posted it to Page Six.

He doesn’t know exactly when his sister penned the letter and believes it even could be a message from a galaxy far, far away due to its nature.

The letter begins, “I am dead. How are you? I’ll see you soon … I would call and tell you what this is like, but there is no reception up here.”

True to her brand of humor, the letter continues, “Cut. New scene, new setup, new heavenly location. I have finally got the part that I have been rehearsing for all my life. God gave me the part. This is the end of the road I have been touring on all my life.”

Todd said the discovery “blew my mind” because he recently attended the Star Wars: The Rise of Skywalker premiere, his sister’s final film.  “I cried,” he told the Post. “Carrie is the heart and soul of the storyline.”Carrie died of a heart attack in December 2016.

Lucasfilm is owned by Disney, the parent company of ABC.

The Rock welcomes Aldis Hodge to the ‘Black Adam’ cast; shares Hodge’s surprised reaction
Cream of Wheat says it will remove Black chef from box that some consumers found offensive
Chrissy Teigen reveals she was hospitalized for pregnancy complication
Jamie Chung says ‘Big Hero 6 The Series’ shows kids “you don’t need powers to be a superhero”
Federal judge denies challenge to the way Ohio handles absentee ballots
Frankie Muniz and wife Paige Price announce they have a “little miracle” on the way