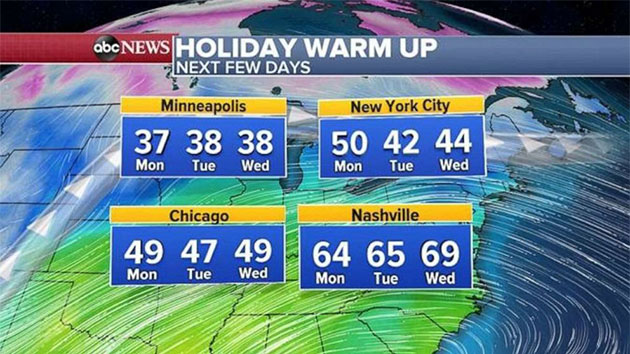 (NEW YORK) — A system developing in the Gulf Of Mexico will push more heavy rain into the Southeast on Sunday. This strengthening storm will slide north and east as it strengthens and brings gusty, damaging winds, severe weather and very heavy rainfall to the region.Wind and flood alerts have been issued for parts of the region, including the major travel hub of Atlanta, where gusty winds over 35 mph are expected Sunday.Severe storms, capable of producing damaging winds and brief tornadoes, are possible across parts of southern Florida, including in the major travel hub of Miami, on Sunday night.On Monday, as the storm moves along the southeast coastline, bringing very heavy rain into South and North Carolina. Locally, 3 to 6 inches of rain is possible from Georgia to North Carolina, with isolated areas receiving 7 inches. This could produce areas of flooding through Monday night with rainfall rates could be up to 2 inches per hour at times.The rain will move out of the area by Christmas Eve.Western storms sliding southMeanwhile, a significant system is bringing heavy rain, mountain snow and gusty winds to the entire West Coast.Wind alerts have been issued across much of the region, including a large part of California. Winter weather advisories have been issued for much of the Sierra Nevadas, as well as the mountains outside of Los Angeles.Heavy rain will move into the San Francisco Bay area Sunday and could bring areas of flash flooding. Additionally, gusty winds up to 50 mph are possible along coastal California.The storm slides south on Monday with heavy rain, locally over 2 inches in the Los Angeles area, and as much as 3 to 6 inches above 5,000 feet outside of the city proper. This could cause some hazardous travel.Holiday warmupTemperatures will be nearly 15 to 20 degrees above average in spots. It will be nearly 50 degrees in Chicago on Christmas Day, which would be much warmer than it was for Thanksgiving or even Halloween. It was 33 degrees and snowing in Chicago on Halloween.Christmas is looking quite different. Copyright © 2019, ABC Radio. All rights reserved.