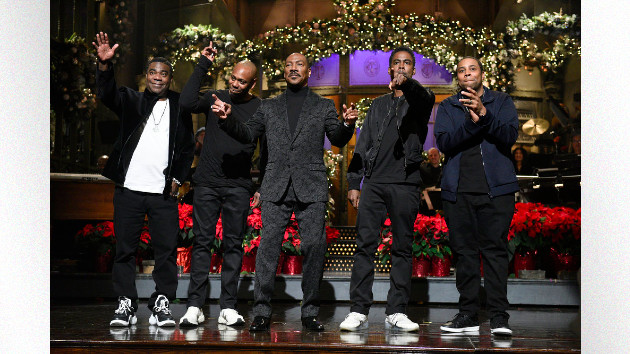 (NEW YORK) — Eddie Murphy made his name as a cast member on Saturday Night Live in the 1980s. On the show’s last episode of the decade this weekend, he finally returned after 35 years away.”It’s great to be back here finally hosting Saturday Night Live,” Murphy declared during his monologue. “But if you’re black, this is the first episode since I left here back in 1984.”The actor was joined on stage during his monologue by some of the biggest black comedians of the past three decades, including Tracy Morgan, Dave Chappelle, Chris Rock and longtime current cast member Kenan Thompson.”I wouldn’t miss this for the world — my kids love Lizzo,” Chris Rock cracked, referring to the night’s musical guest.Among the classic sketches from his time on the show that Murphy brought back Saturday was Mister Robinson’s Neighborhood, a play on Mister Rogers’ Neighborhood featuring a host who lives in the projects.”Can you say gentrification?” Murphy said. “White people pay a lot of money and then, ‘poof,’ all of the black people are gone!”He also met his new neighbors, who “paid $1.2 million for an apartment where my neighbor used to cook crack.”And of course, Murphy also reprised his character Buckwheat, now a surprise contestant on The Masked Singer. He proceeded to sing a number of hit songs with incorrect lyrics. He also brought back Gumby (dammit!) for “Weekend Update.”

Murphy was on 65 SNL episodes as a cast member from 1980 to 1984. He also hosted the show in late 1984 but despite dozens of blockbuster films in the interim, he’d never been back.  Speaking of films, he was just nominated for a Golden Globe for best actor for his role in the comedy Dolemite Is My Name.