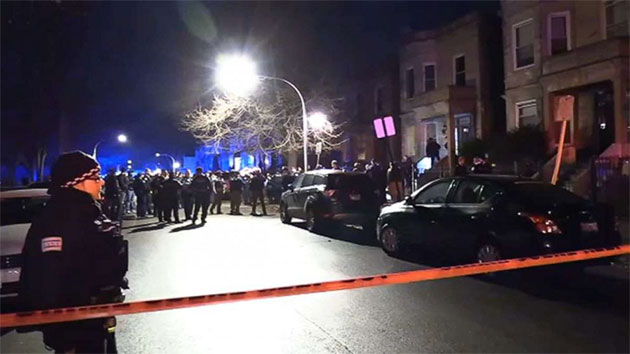 (CHICAGO) —  Thirteen people were wounded, including a 16-year-old boy, when gunfire broke out early Sunday at a memorial party in Chicago for a man who was shot to death earlier this year, police said.”It’s a terrible tragedy and, frankly, an incredible act of cowardice,” Chicago Mayor Lori Lightfoot said during a news conference outside the Univerity of Chicago Medical Center, where she visited victims and their families.The shooting came just three days before Christmas on what has been another violent weekend in Chicago in which a total of 35 people were shot in a multitude of incidents across the city, authorities said.”We can’t normalize this kind of behavior and tragedy in our city,” Lightfoot said.People attending the gathering at a house on the city’s South Side fled the gunfire inside only to be shot when they got outside, said Fred Waller, chief of bureau patrol for the Chicago Police Department.”Looks like they were just shooting randomly at people as they exited the party,” Waller said.Video taken from security cameras showed terrified partygoers bolting from the home only to face more gunfire on the street.At least two men were seen on cameras unleashing a barrage of gunfire outside the event.”One of the people we believe exited that residence … began to fire at people as they left the residence,” Waller said.One of the gunmen was seen on video opening fire on a vehicle that was passing the house just as panicked partygoers were spilling onto the street, he said.Investigators were combing over three different shooting scenes, one inside and two outside the house in the Englewood neighborhood, according to Waller.Many of those attending the party were women and young people, some who had come from out of state, Lightfoot said.The shooting unfolded about 12:34 a.m. when a personal dispute erupted at the house party followed by multiple gunshots, Waller said.”This party was given in the memorial of a subject that was slain in April,” he said.People attending the event told the Chicago Tribune that they were gathered to celebrate what would have been the 23rd birthday of Lonell Irvin, who police say was shot to death on April when he attempted to carjack an armed victim.The victims shot at the party ranged from age 16 to 48, Waller said. Four victims, including the teenager, were listed in critical but stable condition.Two “persons of interest” were detained for questioning, including a man who was armed with a revolver and another who was among the people shot, according to Waller, adding that the wounded man being questioned is possibly the person who initially provoked the dispute.Police were first alerted to gunfire at the house party by ShotSpotter technology, Waller said.Officers arrived within three minutes to find a “chaotic scene” and immediately began administering first aid to victims laying on the ground outside the house on South May Street.Waller said no arrests have been made and Lightfoot suggested that potential witnesses were not cooperating due to fear of retaliation.”People in that house know what happened and we’ve urged them to overcome their fears and come forward with information so that the police can do their job in tracking down the people who were responsible,” Lightfoot said.Lightfoot said the police department is boosting patrols in troubled neighborhoods of the city due to escalating gun violence over the weekend.The mayor had a warning for anyone suspected of using guns to settle disputes: “We’re coming for you,” she said. “We’re not going to tolerate this.”She described victims wounded in the mass shooting at the house party as being in tremendous physical and emotional pain.”One of the victims specifically said to me, ‘I just want to know who did this. I want to make sure they are brought to justice,"” Lightfoot said.