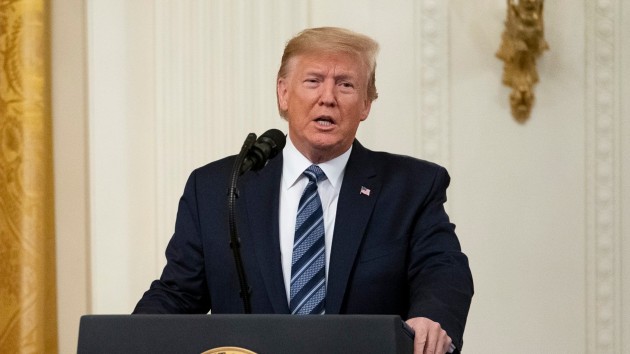 (WASHINGTON) — President Donald Trump on Friday slammed the prominent evangelical publication Christianity Today as a “far left magazine” that is “doing poorly” after the magazine published an editorial labeling him as a “near perfect example of a human being who is morally lost and confused” and calling for his removal from office.

A far left magazine, or very “progressive,” as some would call it, which has been doing poorly and hasn’t been involved with the Billy Graham family for many years, Christianity Today, knows nothing about reading a perfect transcript of a routine phone call and would rather…..

….have a Radical Left nonbeliever, who wants to take your religion & your guns, than Donald Trump as your President. No President has done more for the Evangelical community, and it’s not even close. You’ll not get anything from those Dems on stage. I won’t be reading ET again!

The editorial’s publication Thursday amounted to a surprising act of dissension from within the evangelical community, typically one of the president’s most reliable constituencies. He has often hosted Christian leaders at the White House.Mark Galli, the publication’s editor-in-chief and author of the editoral, writes that the findings of the impeachment inquiry into the president’s alleged attempt to coerce Ukraine into investigating his political rival Joe Biden are “unambiguous.” “That is not only a violation of the Constitution; more importantly, it is profoundly immoral,” Galli writes. “The reason many are not shocked about this is that this president has dumbed down the idea of morality in his administration.” Galli continues: “That he should be removed, we believe, is not a matter of partisan loyalties but loyalty to the Creator of the Ten Commandments.”Christianity Today was founded by the late Rev. Billy Graham. But his son, the Rev. Franklin Graham, has since come forward to say that his father would not agree with the publication’s stand against the president. “Yes, my father Billy Graham founded Christianity Today; but no, he would not agree with their opinion piece,” Graham wrote in a post to his Facebook page. “In fact, he would be very disappointed.” Graham, who has in the past defended the president, went on to reveal that his father voted for Trump. “I have not previously shared who my father voted for in the past election, but because of this article, I feel it is necessary to share it now. My father knew Donald Trump, he believed in Donald Trump, and he voted for Donald Trump. He believed that Donald J. Trump was the man for this hour in history for our nation,” he wrote. Copyright © 2019, ABC Audio. All rights reserved.