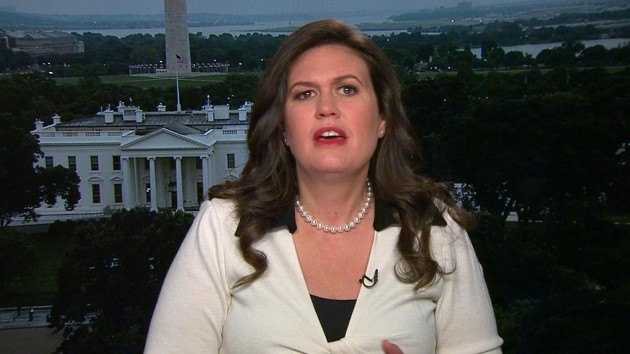 (WASHINGTON) — Former White House press secretary Sarah Sanders has apologized to former Vice President Joe Biden for mocking him on Twitter after he intentionally stuttered during Thursday night’s Democratic debate. Biden’s intentional stutter came when he was answering the final question from moderators during the PBS NewsHour/POLITICO debate, the last Democratic primary debate of the year.Discussing the people he’s kept in contact with after meeting them on the campaign trail, Biden mentioned “The little kid who says, ‘[intentionally stutters] I can’t talk, what do I do?"” Not long after, in a now deleted tweet, Sanders wrote, “I I I I I I I I I I I I I I I hhhave absolutely no idea what Biden is talking about. #DemDebate” Just after the debated ended, Biden responded to Sanders, tweeting back, “I’ve worked my whole life to overcome a stutter. And it’s my great honor to mentor kids who have experienced the same. It’s called empathy. Look it up.”Sanders, saying she was trying to explain what she meant, then tweeted, “To be clear was not trying to make fun of anyone with a speech impediment. Simply pointing out I can’t follow much of anything Biden is talking about.” After that, she responded to Biden, tweeting, “I actually didn’t know that about you and that is commendable. I apologize and should have made my point respectfully.”The former vice president has been vocal about his struggles to overcome stuttering since he was a child, recently being interviewed for a profile in The Atlantic where he talked extensively about stuttering with an author who is also a stutterer. “I know what it feels like to be marginalized — marginalized. When you [intentionally stutters] talk, talk, talk, talk like that as a child, as a kid, everybody makes — just makes fun of you,” he said at a recent event in Iowa. Copyright © 2019, ABC Audio. All rights reserved.