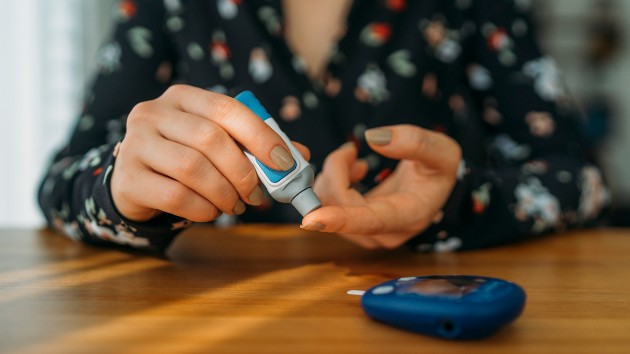 (NEW YORK) — A gap in what we know about diabetes in the United States was filled on Friday, when researchers published the first national estimates about diabetes rates among Hispanic and Asian Americans. Researchers at the Centers for Disease Control and Prevention analyzed national health and nutrition survey data between 2011 and 2016, and found that 22% of Hispanics and 19% of Asians in the U.S. are living with either diagnosed or undiagnosed diabetes.In comparison, 20% of black Americans and 12% of white Americans have the disease, the CDC said. Diabetes, which affects the body’s ability to process sugar, can lead to serious complications, such as cardiovascular disease, nerve damage, skin conditions, depression and Alzheimer’s disease. In addition to demographic risks, other risk factors for diabetes include family history, weight, age and high blood pressure, according to the Mayo Clinic.”This landmark diabetes survey provides essential data that will better inform public health efforts to reach more Americans with tailored, effective prevention and treatment strategies,” Dr. Robert Redfield, director of the CDC, said in a statement. Better understanding diabetes’ prevalence among Hispanic and Asian demographic groups could help doctors and patients reduce their disease risk, he explained.The researchers at the CDC further broke down the data into subgroups, and found that 25% of Mexicans, 22% of Puerto Ricans, 21% of Cubans and Dominicans, 19% of Central Americans and 12% of South Americans are living with diabetes. Among Asian subgroups, 23% of South Asians, 22% of Southeast Asians and 14% of East Asians have diagnosed or undiagnosed diabetes. The new data was published Friday in the Journal of the American Medical Association. Copyright © 2019, ABC Audio. All rights reserved.

Jeremy Renner reveals how he’s training for his upcoming Disney+ series ‘Hawkeye’
The significance of the Bible Joe Biden is using on Inauguration Day
What happens inside the White House on Inauguration Day
Coronavirus live updates: Biden to sign order requiring masks on federal property
How to watch Joe Biden’s inauguration with kids
Jake Gyllenhaal hails ‘Donnie Darko’ on its 20th anniversary: “It’s a film that changed my life”