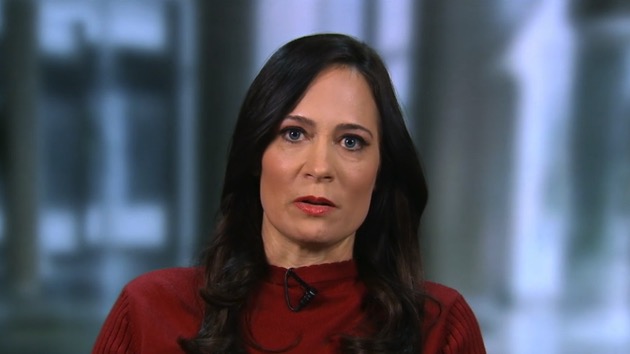 (WASHINGTON) — After President Donald Trump lashed out against a Michigan congresswoman for supporting his impeachment — joking that her deceased husband may be in hell — the White House press secretary said on ABC’s Good Morning America Thursday that, while she was “very, very sorry” for the congresswoman’s loss, Trump was a “counter-puncher” who was “under attack.”As he became the third president in U.S. history to be impeached on Wednesday night, Trump told supporters at a campaign rally in Michigan that Rep. Debbie Dingell, a Democrat — whom he referred to mockingly as “a real beauty” – had called him shortly after her husband, the long-serving Rep. John Dingell, had died, to thank him for being supportive.”She calls me up,” Trump said of Dingell, who was voting for his impeachment while he spoke. “‘It’s the nicest thing that’s ever happened, thank you so much, John would be so thrilled. He’s looking down, he’d be so thrilled. Thank you so much, sir.’ I said, that’s okay, don’t worry about it. Maybe he’s looking up, I don’t know. I don’t know. I don’t know. Maybe. Maybe. But let’s assume he’s looking down.”White House press secretary Stephanie Grisham told ABC News Chief Anchor George Stephanopoulos in an interview on Good Morning America Thursday morning that she had not spoken to the president about his comments but that Trump had been under heavy pressure.”He was at a political rally,” Grisham said. “He has been under attack, and under impeachment attack, for the last few months, and then just under attack politically for the last two-and-a-half years. I think that as we all know, the president is a counter-puncher.””It was a very, very supportive and wild crowd, and he was just riffing on some of the things that had been happening the past few days,” she continued.

After Trump knocked her and her husband, Dingell took to Twitter to implore the president to “set politics aside.””Mr. President, let’s set politics aside,” Dingell wrote late Wednesday. “My husband earned all his accolades after a lifetime of service. I’m preparing for the first holiday season without the man I love. You brought me down in a way you can never imagine and your hurtful words just made my healing much harder.”Grisham said she was sorry for Dingell’s loss.”I would say that I am very, very sorry for her loss,” Grisham said. “And I would thank her and I would thank her late husband for all of the service to our country.”But Dingell said in an interview with CNN Thursday morning that Trump was the one who called her.“I think it’s time to put politics aside on these kind of shots,” Dingell said. “I try to be respectful of everybody. I’ve never taken a personal shot at this president. I think his family is off limits. I was very grateful. By the way, he — I didn’t call him. He called me to tell me he was lowering the flags.”Trump told the Michigan crowd he wouldn’t “go into the conversation” he had with Dingell, “because it’s not fair to do that.”“But all I want to say is, let’s put it this way,” he said. “It was the most profuse thank you that you could ever get. On a scale of zero to 10, it was a 10, OK?”He said that despite all he did for the late congressman – and Dingell’s thankful words earlier this year – Dingell turned on him as the impeachment process ramped up.“Now, they talk about this phony impeachment,” Trump said, “and she’s out there, ‘Well, we have to look seriously at our president, because he may have violated the Constitution of the United States. And I can’t be happy with that, because I love our country, I love this, I love that.’ She loves everything.“And I said, she’s a no, OK?” Trump said, referring to votes on articles of impeachment against him. “But I look at her, and she’s so sincere, and what happens? ‘I vote to impeach Trump.’”Trump also suggested Wednesday night that he played a role in the late congressman lying in repose under the Capitol Rotunda – which did not happen.”I didn’t give him the B treatment. I didn’t give him the C or the D. I could have. Nobody – you know – I gave him the A plus treatment,” Trump said. “Take down the flags. Why are you taking them down? For ex-Congressman Dingell. Oh, okay. Do this, do that, do that, Rotunda, everything, I gave Dingell everything. That’s okay. I don’t want anything for it, I don’t need anything for anything.”But John Dingell did not lie in repose in the Capitol Rotunda – and even if he had, it is Congress – not the president – that grants such an honor.A World War II veteran, the congressman was buried in Arlington National Cemetery.“I didn’t want anything that was out of the ordinary or something where somebody would do something special,” Dingell said Thursday morning.She said her family was still in pain.“My family’s still hurting,” she said, noting her brother-in-law moved into hospice care over the Thanksgiving holiday. “These kinds of things — we’re a family grieving. So, I think we should take a lesson from this and all respect each other, period. In the broader — We need more civility in this country. Some things should be off limits. And you know what? We’re all human beings.”Grisham noted on “Good Morning America” that Trump ordered the flags at the White House lowered and that he had his staff “do everything he could to honor him, at her request.”Dingell said on CNN that she was, in fact, “grateful” for Trump lowering the flags.A wide range of politicians blasted Trump’s remarks, including at least one Republican.Rep. Fred Upton, a Republican from Michigan, tweeted that Trump’s comments were wrong.“I’ve always looked up to John Dingell – my good friend and a great Michigan legend,” Upton wrote. “There was no need to ‘dis’ him in a crass political way. Most unfortunate and an apology is due.”