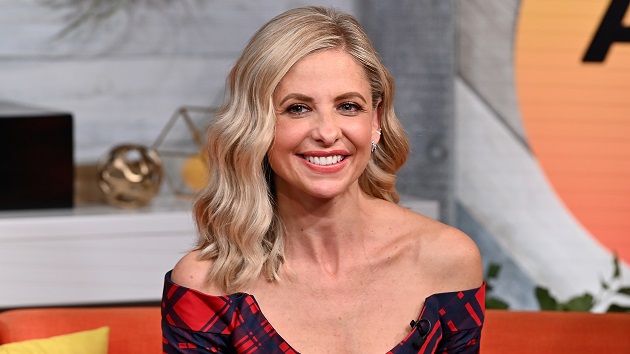 (LOS ANGELES) —  Sarah Michelle Gellar showed just how petty she can be when someone criticizes her fashion choices.  Even if the critic is Freddie Prinze Jr., her husband of 17 years.

On Wednesday, the Buffy the Vampire Slayer actress plotted her revenge on Instagram.  In a photo of her modeling next to the staircase while wearing shiny black baggy pants, she lets fans in on her family dilemma, “When your husband thinks your pants are slightly ridiculous, what do you do!?!?”

It’s then revealed just how far she’s willing to go to make Freddie eat his words, “Obviously you take tons of dramatic pictures, and spam him with them.”  She cheekily adds that she is indeed wearing her daughter’s headband in the picture before threatening to unleash even more photos upon her unsuspecting husband.

In a hilarious turn of events, Freddie unapologetically burst into the comments section and insulted her new clothes once again.  “No babe, trash bag sweat pants are obviously not ridiculous,” he sarcastically commented with a palm face emoji.

Unfortunately for him, it appears he’s the only one with such a negative opinion on Sarah’s new pants.  Actress Zoey Deutch showed her approval with a flame emoji while fashion designer Christian Siriano approvingly called her choice of wardrobe “Chiccc.”

Gellar didn’t respond to her husband’s remark, but did reply to a fan who demanded to know where she got her black combat boots by revealing they were Steve Madden.

Meghan Markle is cold calling Americans to encourage them to vote
Estee Lauder to pay NASA $17,500 an hour for pictures of its new night serum onboard International Space Station
State Dept. protocol office under scrutiny for alleged role in Pompeo’s use of resources
Coronavirus live updates: Cases on the rise in 3 states
Zach Braff says Emmys “passed” on including Nick Cordero in In Memoriam tribute
Coronavirus live updates: University to test campus wastewater for COVID-19