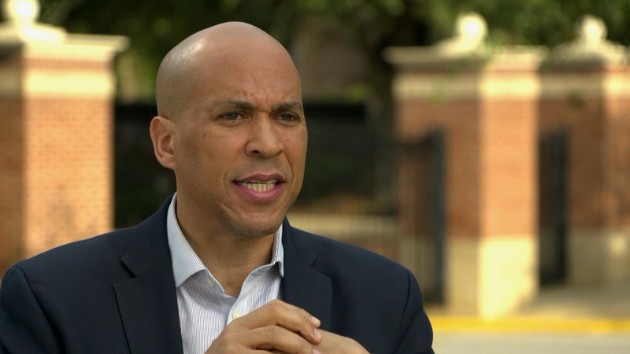 (WASHINGTON) — New Jersey Sen. Cory Booker and former Housing and Urban Development Secretary Julián Castro are out with new ads on the day of the final Democratic primary debate of 2019, which neither candidate qualified to participate in. Booker’s ad, titled “Together,” will air during the debate on cable in 22 markets, including ones in the four states that vote in February — Iowa, New Hampshire, Nevada and South Carolina — as well as in Washington, New York and Los Angeles, the host city for the debate.This is the Booker campaign’s first television ad, and the 30-second spot is part of a $500,000 digital and television ad buy. In the ad, he says that even though he’s not on the debate stage, “that’s OK, because I’m going to win this election anyway.”

This is big, team! Today we're airing our campaign's first TV ad. RT to help spread the news and chip in now to help us run more like it: https://t.co/thGpnEeVEd pic.twitter.com/0Faqa0YSoj

The New Jersey senator also seems to take a swipe at fellow candidates Michael Bloomberg, the former mayor of New York, and Tom Steyer. Booker starts the ad saying, “You’re only gonna see this ad once because I’m not a billionaire.” Bloomberg and Steyer, both billionaires, have spent over $100 million and over $50 million, respectively, on television ad buys, according to data from CMAG. This will be the first of six debates that Booker didn’t qualify for. While he secured 200,000 individual donors, achieving the grassroots fundraising threshold set by the Democratic National Committee, he failed to get any of the four qualifying polls he needed, according to an ABC News analysis.Like Booker, Castro also met the donor threshold, according to his campaign, but had zero qualifying polls, according to an ABC News analysis. This will be the second debate in a row that Castro didn’t qualify for. Castro’s 30-second ad, titled “Truth to Power,” was filmed at a recent town hall in Iowa where he made the argument that both Iowa and New Hampshire shouldn’t be the first to vote in the primary process because of the lack of diversity in the states.”It’s time for the Democratic Party to change the way that we do our presidential nominating process, and I’ve said very bluntly that it’s time for a state other than Iowa to go first,” Castro says. The ad then shows one Des Moines, Iowa, resident who says he “completely agrees” with Castro that Iowa shouldn’t vote first.

I’m telling the truth, even when it’s not politically convenient.Check out my new ad airing in Iowa today. pic.twitter.com/JMEzoXaJpV

Castro has no campaign events Thursday, but not being on the stage didn’t stop him and his team from traveling to Los Angeles for events Wednesday, a move he also pulled last month when he campaigned in Atlanta, the November debate host city. Booker has decided to campaign away from the debate, doing a community service event in Las Vegas and then heading to Iowa, where he’ll participate in a phone bank Thursday night before embarking on a bus tour Friday.Both ads come after nine Democratic campaigns, led by Booker and including Castro, sent a letter to DNC Chairman Tom Perez over the weekend calling for a change to its debate qualification standards. It was signed by Booker, Castro and all seven candidates set to participate in Thursday’s debate — former Vice President Joe Biden, South Bend, Indiana, Mayor Pete Buttigieg, Minnesota Sen. Amy Klobuchar, Vermont Sen. Bernie Sanders, businessman Tom Steyer, Massachusetts Sen. Elizabeth Warren and entrepreneur Andrew Yang. “We’re just asking the DNC to be more thoughtful about these thresholds to allow for more robust conversation up there on the debate stage. And at the end of the day, you know, people are going to vote soon, so I think they’re going to do the work instead of the DNC,” Castro said of the letter in an interview on MSNBC Monday.While the letter didn’t put forth any specific criteria, it asked the DNC to revert back to “the previous criteria that allowed candidates to qualify to participate either via meeting a minimum polling threshold or meeting a number of grassroots donors to demonstrate broad-based support.” For the first two debates, candidates could meet either the polling or grassroots fundraising thresholds, but since the third debate, candidates have had to achieve both, and the thresholds have increased. The letter also asserts that “the escalating thresholds over the past few months have unnecessarily and artificially narrowed what started as the strongest and most diverse Democratic field in history before voters have had a chance to be heard.”With California Sen. Kamala Harris suspending her campaign, Yang will be the only candidate of color on the debate stage. In a statement responding to the letter, the DNC said it’s had a “fair and transparent process.” “The DNC will not change the threshold for any one candidate and will not revert back to two consecutive nights with more than a dozen candidates. Our qualification criteria is extremely low and reflects where we are in the race,” DNC Communications Director Xochitl Hinojosa said. Copyright © 2019, ABC Audio. All rights reserved.