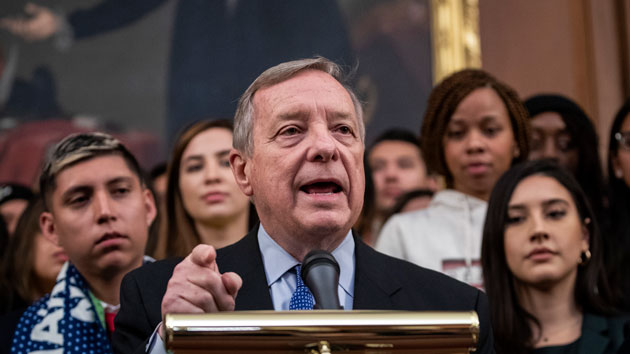 (WASHINGTON) — Senate Minority Whip Dick Durbin of Illinois told ABC News’ Powerhouse Politics podcast on Wednesday that privately, some Republican senators, under the leadership of Majority Leader Mitch McConnell, are worried about the future of an impeachment trial in the face of an increasingly partisan process.

“There may be some dissension in his own ranks,” Durbin said of McConnell to ABC News’ Political Director Rick Klein and Deputy Political Director MaryAlice Parks.Outside of the party, McConell and Minority Leader Chuck Schumer have quarreled this week in regards to if senators will be able to call witnesses when impeachment comes to a trial. Schumer has pushed for witnesses to be called for the Senate trial, in accordance with what a typical trial would look like. McConnell, though, has yet to answer to that demand, saying he would rather decide mid-trial as to bring witnesses in or not.Durbin told the hosts if a united Democratic caucus was able to garner the support of just four Republican senators, that would be enough to influence the way a trial is conducted, regardless of McConnell’s wishes.He said he thought the final vote on impeachment might be different if senators voted in a secret ballot, where they could vote their consciences without fear of political backlash.”I’m sorry to say, I do think it would make a difference,” he said. “We have noticed a number of our Republican colleagues who have stepped away from the president’s own political feelings or his own party line and been hidden farthest back into the discipline position.”Durbin, like many other lawmakers have done during the impeachment process, cited the Founding Fathers as part of his decision-making.”Alexander Hamilton said ‘We’ll leave this up to the Senate to decide the fate of impeachment because of two reasons: they are independent and dignified,"” Durbin said. “The independent part, I’m afraid, was attacked head-on when Mitch McConnell said, ‘I’ve already made up my mind, I’m with the president. I’ll be calling on him for signals as to what we ought to do with this trial.’ That was a shame.”He added, “It’s not just President Donald Trump on trial for impeachment. The Senate’s on trial in terms of our institutional responsibility under the Constitution.”Last week on Fox News, McConnell told host Sean Hannity that he was coordinating with White House counsel during impeachment.”Everything I do during this, I’m coordinating with the White House counsel. There will be no difference between the president’s position and our position as to how to handle this to the extent that we can,” he said on the show.Parks asked Durbin what he thinks will happen when the trial heads across the Capitol and into the Senate, and if Democrats are at all lobbying on Republican colleagues who may break from party lines.”I do believe that a number of senators, when they finally come to appreciate the gravity of this experience, may reflect on their place in history based on their vote one way or the other,” Durbin said. “I think it’s a part of my constitutional responsibility.”He continued, “I wish our Republican friends would put their country before their party. I wish they would put the Constitution before their political agenda when it comes to impeachment. The same standard holds true to Democrats.”Senate Republicans told reporters after a caucus lunch on Tuesday that the Senate’s potential impeachment trial will likely begin on Jan. 6. On the Senate floor, McConnell said that he imagined the trial would mirror former President Bill Clinton’s impeachment trial, and that the Senate could take two votes on the procedures, one on things like scheduling and opening arguments, and the other on whether or not witnesses would appear.McConnell said in his opening remarks on the Senate floor on Wednesday that he hopes he and Schumer will be able to sit down to iron out their differences, noting that during President Clinton’s impeachment, all 100 senators unanimously agreed on the Senate trial rules”If 100 senators thought this approach is good enough for President Clinton, it ought to be good enough for President Trump,” he said.Despite the current process, Durbin urged his colleagues to decide their votes based on the Constitution.”We should be doing this for the right reasons. And the right reasons come down to the cause of justice and whether this president abused the power of his office for personal or political benefit,” Durbin said. “That is a fundamental question under our Constitution, whether it’s popular or unpopular.”Powerhouse Politics podcast is a weekly program that posts every Wednesday, and includes headliner interviews and in-depth looks at the people and events shaping U.S. politics. Powerhouse Politics podcast is hosted by ABC News Chief White House Correspondent Jonathan Karl and ABC News Political Director Rick Klein.Copyright © 2019, ABC Audio. All rights reserved.