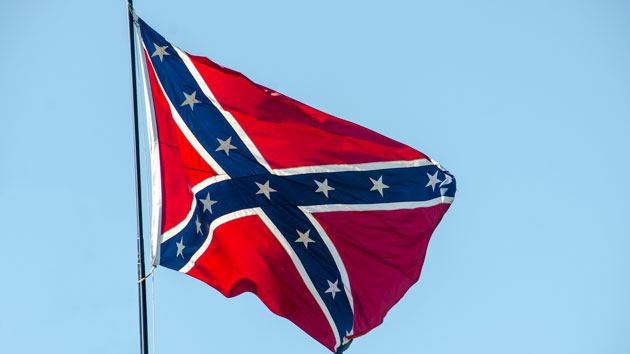 (WEST PLAINS, Mo.)– Students at a southern Missouri high school displayed a Confederate flag in the school’s lunchroom last week in response to students supporting LGBTQ rights handing out rainbow flags earlier in the day, sparking widespread debate online about freedom of speech.Rose, a 15-year-old sophomore at West Plains High School, said she and her friends ordered about 60 rainbow flags on Dec. 9 and began handing them out to other students in a show of inclusiveness.In response, said Rose, some students responded with anti-gay slurs and others ran out of the cafeteria and called their parents to take them home.In addition, several students shared photos of classmates holding up a large Confederate flag along with comments superimposed over the images.”I think it is a problem that we have an entire month dedicated to someone’s sexuality and only a day for veterans,” one student wrote. “You have the right to fly your LGBTQ flag just like I have the right to fly my American and/or rebel flag.”Rose said she had no idea that the gesture would cause controversy.”I wanted to do something nice for the LGBTQ+ kids at my school because I knew a lot of them couldn’t get the flags by themselves,” Rose told ABC News on Tuesday. “And for the students that couldn’t take one, they could at the very least see that they are not alone. It’s very easy to feel that way around here.”As to why students chose to showcase the Confederate flag, Rose said it seems as if it was done to protest against the LGBTQ lifestyle.The West Plains School District issued a statement in response to the incident, saying students on both sides were asked to put their banners away because they were becoming a distraction. No disciplinary action was taken.”While students’ first amendment rights were respected, administrators learned the banners were used by some to taunt other students, which is a distraction to learning and is not acceptable by any measure,” district spokesperson Lana Snodgras told ABC News in a statement Tuesday. “Rather than deal with this as a disciplinary matter, it was treated as a learning experience and opportunity to teach students to respect each other and different viewpoints on a variety of societal issues.”Rose said she agrees with the decision by school administrators to remove all flags but that they didn’t deal with the related issue of bullying.”I think it was entirely appropriate to take away the [confederate] flag. They said something along the lines of, ‘If they can fly their queer flag, we can fly ours,’ but no one was stopping them,” Rose said. “They did that and said that as a kind of retaliation, and to cause a disruption.””The main point in this story isn’t even the flags — it’s the immense bullying issue,” she said.Rose said some students were “very supporting,” noting how many religious and non-LGBTQ classmates grabbed flags as a show of support.However, she said, “Many harshly bullied the kids with flags, especially after the Confederate flag was brought out.””The bullying not only targeted queer students, but also students of color,” she said. “I know someone who was shoved and called a racial slur along with many people that were shoved, spit on, and more. People also stole and broke flags from the LGBTQ+ flag holders.””A lot of my friends, as well as I, are LGBTQ+ and we get bullied more and have a higher chance of being bullied,” Rose added.Rose’s friend Taylor, who helped purchase and pass out the flags, said she witnessed the bullying first-hand.Taylor said that she’s been targeted online by classmates and adults who have said “awful things” because they don’t agree with her opinions.”I wasn’t surprised. People here are closed-minded and I don’t think they’re ready for something like this,” Taylor, a 15-year-old sophomore, told ABC News. “I mean yeah, the school has a problem with racism and homophobia, but what school doesn’t? It isn’t the school’s fault, it’s children and what they’re told.””People are more concerned about the flags, rather that the bullying. That wasn’t the point. It’s about kids being discriminated against, due to color and sexuality, which is something we should’ve moved past by now,” she added.Both Taylor and Rose said they’re hoping to make the best out of the situation by using it as an example of why people should learn to be more tolerant.”The main thing we can do is educate people,” Rose said. “Many people are hateful just because they don’t understand.””We need to normalize other sexualities, gender identities and skin colors other than just straight and cisgender and white. People should realize that not everyone is like them and they should be respected, not looked down upon,” she said. “This isn’t ‘asking for special rights’ either — like some would like to believe. The LGBTQ+ students and students of color just want to be treated well.”Copyright © 2019, ABC Audio. All rights reserved.

Meghan Markle shares they key to speaking out on important issues, “It’s about being authentic”
Flynn lawyers, DOJ continue push to get case thrown out
Man plummets to his death after falling from branch on cliff while posing for picture
‘Dancing with the Stars’ season 29 recap: Carole Baskin lets out her last roar on the dance floor
After her child died in a tip-over accident, mom makes desperate plea to parents
Former Trump campaign manager hospitalized after threatening to harm himself: Police