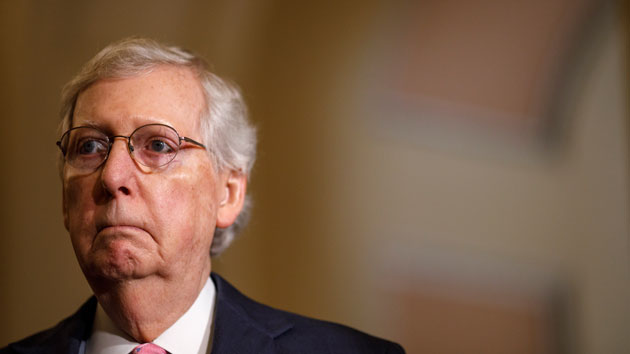 (WASHINGTON) — Following a day of partisan bickering between Senate party leaders on Capitol Hill over the upcoming impeachment trial, Majority Leader Mitch McConnell said Wednesday that he hopes he and his Democratic counterpart can still sit down to hash out their differences.McConnell, in his opening remarks on the Senate floor, reminded Minority Leader Chuck Schumer of what he said were more bipartisan times: the impeachment trial of former President Bill Clinton in 1999.McConnell noted that all 100 senators at the time unanimously agreed on the Senate trial rules and procedures at the outset of the impeachment proceedings. They did not, McConnell noted, negotiate the terms of the trial through the press and before opening arguments had even been given.”Back in 1999, all 100 senators agreed on a simple pre-trial resolution that set up a briefing, opening arguments, senators questions, and a vote on a motion to dismiss,” McConnell described.”I’ve hoped and still hope that the Democratic Leader and I can sit down and reproduce that unanimous bipartisan agreement this time,” McConnell said. “His decision to try to angrily negotiate through the press is unfortunate.””But no amount of bluster will change the simple fact that we already have a unanimous bipartisan precedent. If 100 senators thought this approach is good enough for President Clinton, it ought to be good enough for President Trump,” McConnell said.”I hope House Democrats see reason and pull back from the precipice, but if they proceed, I hope the Democratic Leader and I can sit down soon and honor the template that was unanimously agreed to the last time,” he added.Schumer, however, is not backing down from his pre-trial request of having witnesses appear before the Senate. He called out McConnell for making “incomplete” and “irrelevant” comparisons to Clinton’s trial.Schumer, in a letter addressed to the McConnell, asked to hear from four witnesses during the Senate’s impeachment trial – acting White House chief of staff Mick Mulvaney, former National Security Adviser John Bolton, Associate Director for National Security at the Office of Management and Budget Michael Duffey, and senior adviser to the acting White House chief of staff, Robert Blair – all of whom refused to participate in the House investigation.”There is one fact that is impossible for the Senate to ignore. In the two presidential impeachment trials in the history of this body, the Senate heard from witnesses,” Schumer said Wednesday on the floor.Schumer also expressed his disappointment in McConnell’s claims that he will not be an “impartial juror” during the trial.On Tuesday, McConnell told reporters: “This is a political process, there’s not anything judicial about it. Impeachment is a political decision, the House made a partisan political decision to impeach. I anticipate we will have a largely partisan outcome in the Senate. I’m not impartial about this at all.””He said it proudly!” Schumer exclaimed. “What kind of example does that set to the country who’s looking for fairness and impartiality?””This is an astonishing admission of partisanship. The president may demand these public displays of fealty, but they are troubling for the leader of an independent branch of our government,” Schumer said. “I hope all senators will take seriously the oath to do impartial justice that we seem likely to take in the near future.”Schumer said that some Republican senators have privately told him that while they believe the charges against the president are serious, they haven’t seen enough evidence to make a decision – which is why he wants to haul in witnesses with direct knowledge as to why aid was withheld from Ukraine.”That’s one of the reasons I’ve proposed subpoenas for the witnesses and documents, all directly relevant from officials who have yet to testify under oath during any stage of the house process,” Schumer said earlier in the week.McConnell and Schumer are still expected to sit down for pre-trial negotiations sometime before the holiday recess. Copyright © 2019, ABC Audio. All rights reserved.