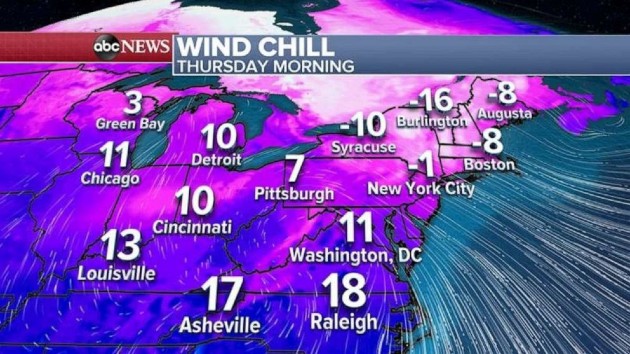 (NEW YORK) — Finally, the storm system that has been moving across the country has moved out — but not before it brought an icy mess to the Midwest and Northeast, and 38 tornadoes to Louisiana, Alabama, Mississippi and Georgia since Monday. The freezing rain and the ice accumulation from the storm was the worst for the roads in the Northeast Tuesday. Up to 0.68 inches of ice accumulated in Maryland, while New Jersey had 0.4 inches, New York had 0.38 inches, Pennsylvania had 0.5 inches and Connecticut had 39 inches. Snowfall totals from the storm in the Northeast were up to 11 inches in Upstate New York, 5 inches in New Hampshire and 4.6 inches in Massachusetts. Although the storm has moved out, the coldest air of the season is now moving into the Northeast — although the core of the coldest air will miss most of the Midwest. Thursday morning will be the coldest morning of the season for the East Coast.Now, our attention turns to the West, where a series of storms will be enhanced by an atmospheric river over the next few days, bringing a threat for flooding to the coastal areas and heavy mountain snow. Numerous winter storm watches and warnings have been issued for the West ahead of this atmospheric river.Up to a half a foot of rain is expected in Oregon and southern Washington through the end of the week, which will cause rivers to rise and flooding to occur. In the mountains, several feet of snow is expected. Three feet is possible in the Cascades.After our recent cold blast in the eastern U.S., a major warm-up is coming for Christmas Week around most of the country, just in time for the holiday.