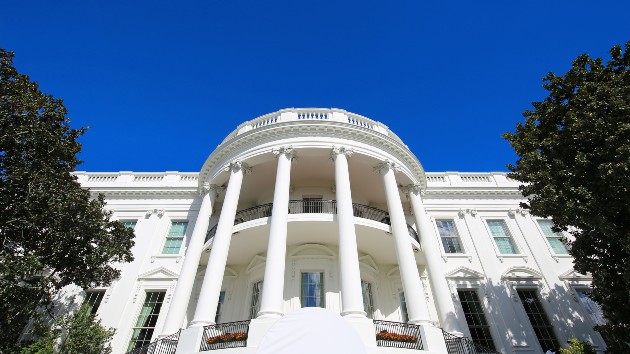 (WASHINGTON) — President Donald Trump spent much of Wednesday — as House of Representatives debated whether to impeach him — hunkered down in the White House before traveling to Michigan for a campaign rally.Trump has tweeted over 50 times since Tuesday night about impeachment-related topics, saying that he expected to be impeached and that those who oppose him are “crazy.”After the House began debate on two articles of impeachment against him on Wednesday, the president tweeted in all caps: “SUCH ATROCIOUS LIES BY THE RADICAL LEFT, DO NOTHING DEMOCRATS. THIS IS AN ASSAULT ON AMERICA, AND AN ASSAULT ON THE REPUBLICAN PARTY!!!!”Minutes earlier, the White House press secretary, Stephanie Grisham, had said that Trump was “working all day” and was holding “meetings,” although White House officials repeatedly declined to say what the topics of the meetings were or with whom Trump was meeting, other than confirming that he still planned to receiving an intelligence briefing as scheduled.”The President will be working all day,” Grisham said in a statement. “He will be briefed by staff throughout that day, and could catch some of the proceedings between meetings.”Trump’s only public event Wednesday will take him to Battle Creek, Michigan, where he plans to speak at a rally for his 2020 re-election campaign. He was scheduled to take the stage at 7 p.m., around the same time the House is expected to vote on the articles of impeachment.The White House said he would depart at 4:25 p.m., after hours of debate on the House floor; he often speaks to reporters as he leaves.Trump spent much of Wednesday morning, though, in the residence of the White House rather than the West Wing, where aides watched television coverage of the impeachment proceedings.The president used his Twitter platform to amplify the voices of conservative allies on the Hill and in who have backed him throughout impeachment proceedings.”Can you believe that I will be impeached today by the Radical Left, Do Nothing Democrats, AND I DID NOTHING WRONG!” he wrote on Twitter Wednesday morning. “A terrible Thing,” he said.He tweeted Tuesday night that he was “not worried” about being impeached, calling those who want to impeach him “Crazy.” He shared missives from conservative allies of his who have backed him as the House impeachment inquiry examined whether he used his office to pressure Ukraine for his own personal, political benefit.A senior aide to the president told ABC News Trump was “ebullient” even as he faced becoming only the third president in U.S. history to be impeached.While the president did not want to be impeached, the aide said, he was comfortable sparring with Democrats and planned to claim full and total vindication if the Senate votes against removing him from office in any coming trial.Trump’s public show of defiance continued a day after he sent an extraordinary six-page letter to Speaker Nancy Pelosi railing against what he calls an “illegal, partisan attempted coup.”Making no attempt to mask his feelings of personal animus toward Pelosi, the president accused her of being inauthentic for saying she prays for him and that she has approached the process of impeachment in a “prayerful” manner.He mocked her again on Wednesday.”This should never happen to another President again,” Trump wrote on Twitter. “Say a PRAYER!”White House lawyers were cut out of the process of drafting Trump’s Tuesday letter to Pelosi and was instead drafted by as team of three White House staffers from outside the White House Counsel’s office.At the direction of the president, Director of Legislative Affairs Eric Ueland, senior adviser Stephen Miller and Counselor to the Chief of Staff Michael Williams crafted the document.”The words are the president’s,” a White House official familiar with the process said.White House counsel Pat Cipollone and his office were cut out of the drafting process but did get a chance to see the letter and make suggestions before it was sent to Pelosi.Copyright © 2019, ABC Audio. All rights reserved.