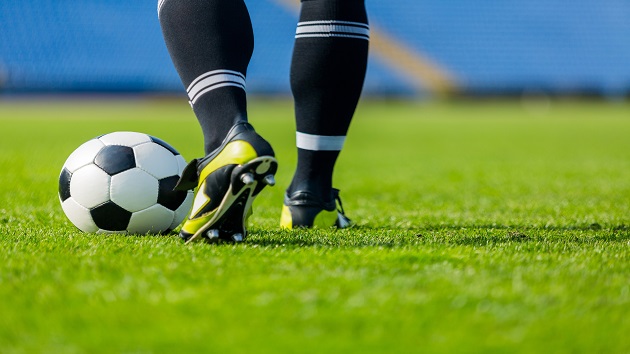 (ROME, Italy) — An effort to promote anti-racism in Italian professional soccer created an uproar of its own with a questionable poster design.Serie A, Italy’s top soccer league, commissioned posters designed by artist Simone Fugazzotto to feature in an anti-racism campaign. The “No-to-Racism” posters he drew featured images of monkeys’ faces and were displayed at the Serie A headquarters in Milan Monday at a presentation.Rather than inspire an end to racism in the stadium, many said the posters brought to mind the use of monkeys as racist slurs. In Italy and across Europe at soccer matches, bananas have been hurled at players on the field and fans have chanted ape-like noises from the stands as well as shouted racist insults directed toward black players.Serie A’s chief executive, Luigi de Siervo, said in a statement to ABC News that he expresses “his sincere apologies for the artwork that was presented yesterday, I realized it was inappropriate.””What cannot be questioned is the strong and constant condemnation by Lega Serie A against all forms of discrimination and racism, and we are committed to eradicate this from our beloved league,” the statement continued. The league confirmed it “is working on its official anti-racism campaign, which cannot be identified with Simone Fugazzotto’s work, and it will be presented by the end of February.”De Seirvo said in a press conference Monday that Italian soccer has made a commitment to combat all forms of prejudice in the sport, including by launching a task-force “dedicated to social responsibility and anti-racism.”Critics say the roll-out of the new poster campaign is the latest example of what anti-discrimination groups says is an endemic problem in the game.The anti-defamation group FARE blasted Serie A, Italy’s top soccer league, saying in a tweet the depiction of three monkey faces painted in different colors “leaves the world speechless.””In a country which the authorities fail to deal with racism week after week, Serie A have launched a campaign that looks like a sick joke,” FARE tweeted.

The artist Fugazzotto, meanwhile, has not stayed quiet in defending his work.

“There may be gaps in communication, but I don’t believe I have shared an unclear message: Three monkeys with human characteristics from every latitude painted on a picture is not a message of equality?” Fugazzotto, who frequently uses primates in his work, said in an interview with Corriere della Sera this week.”I decided to portray monkeys to talk about racism because they are the metaphor for human beings,” he said in May, according to Serie A. “Last year I was at the stadium to see Inter-Napoli and I felt humiliated, everyone was talking about the monkey at Koulibaly, a player I respect. I’ve always been painting monkeys for five to six years, so I thought I’d make this work to teach that we’re all apes, I made the western monkey with blue and white eyes, the Asian monkey with almond-shaped eyes and the black monkey positioned in the center, where everything comes from. The monkey becomes the spark to teach everyone that there is no difference, there is no man or monkey, we are all alike. If anything we are all monkeys.”Kick-It-Out, another anti-discrimination organization, said the symbol was a mistake.”It is encouraging when any governing body recognizes they need to do more to tackle discrimination. Sadly, Serie A’s use of monkeys in their anti-racism campaign is completely inappropriate, undermines any positive intent and will be counter-productive,” the group said in a statement obtained by ABC News.Racist acts by some in the crowd in Europe — and particularly in Italy — are directed specifically at players on the field and are meant to humiliate and upset them. World class players of color from both Italian and international clubs have been subjected to racist slurs.Belgian Romelu Lukaku said in a September Instagram post that monkey noises made at him after he scored a goal at a match showed “we’re going backwards.”Italian Mario Balotelli angrily kicked a ball into the stands in November after racist slurs were made at him. He scolded the fans in an Instagram story, according to La Repubblica, by repeatedly writing, “Shame.”Copyright © 2019, ABC Radio. All rights reserved.

Meghan McCain of ‘The View’ gives birth to baby girl
Presidential debate: Trump, Biden face off for first time ahead of November’s election
Windy, dry and hot weather will continue for parts of California
Man plummets to his death after falling from branch on cliff while posing for picture
Octoberfest in Downtown DuBois this Saturday
Trump and Biden to face off in 1st 2020 presidential debate