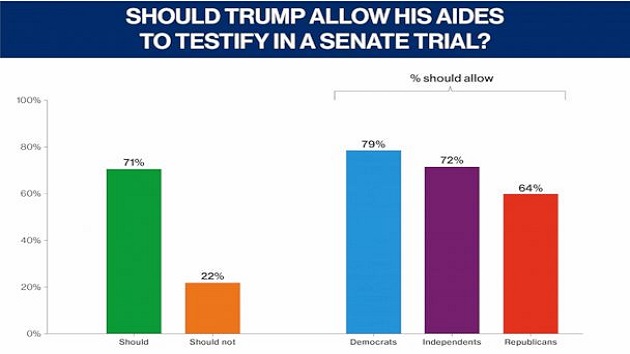 (WASHINGTON) — Seven in 10 Americans in a new ABC News/Washington Post poll say President Donald Trump should allow his top aides to testify in a Senate trial on the impeachment charges against him, and six in 10 expect a fair trial in the Senate, two points of majority agreement — across party lines — in the otherwise divisive impeachment saga.More than half, 55%, also say Trump was treated fairly in the House Intelligence and Judiciary Committee hearings that led to the articles of impeachment against him. But partisan divisions on this question are vast, as they are on most other impeachment issues.The public continues to split essentially evenly on whether or not Trump should be impeached and removed from office, with 49% in favor, 46% opposed in this poll, produced for ABC News by Langer Research Associates. That’s virtually identical to the 49%-47% division in an ABC News/Washington Post poll in late October. There’s a slightly larger margin for congressional censure of Trump, 51%-42%. Should the House vote to impeach as expected Wednesday, 71% of Americans say Trump should allow his top aides to testify in the expected Senate trial. Notably, 64% of Republicans say so, as do 72% of independents and 79% of Democrats.There’s also bipartisanship in the expectation that Trump will get a fair trial in the Senate: 62% of adults are very or somewhat confident of this, including approximately equal numbers of Republicans (61%), Democrats (62%) and independents (64%). Still, there’s room for doubt: only about half as many, in each of these groups, are “very” confident he’ll get a fair trial.Those majority bipartisan results are in sharp contrast to views of the House hearings. While 55% say Trump was treated fairly in those hearings (a point he contests), that ranges from 87% of Democrats to 58% of independents and just 17% of Republicans.Other results also are sharply divided, with 85% of Democrats saying Trump should be impeached and removed from office, compared with 47% of independents and 12% of Republicans – numbers that result in the overall 49%-46% split. Strength of sentiment also is evenly divided; 38% feel strongly that Trump should be impeached and removed (down 6 points from late October); 34% strongly oppose his impeachment and removal. There are divisions on related measures as well. Regardless of whether it was an impeachable offense, 49% think Trump improperly pressured Ukraine to investigate former Vice President Joe Biden and his son; 39% think not, with the rest undecided. That’s a far cry from Trump’s position that his actions were “perfect,” yet also short of a majority conclusion of impropriety.Similarly, 49% say Trump tried to interfere with the impeachment investigation in a way that amounted to obstruction of Congress, one of the articles of impeachment against him. Forty-three percent don’t see obstruction of Congress.None of those engaged in the impeachment debate get positive marks for handling it: 39% approve of how Trump has handled the impeachment inquiry in the House, with 53% disapproving. It’s 41%-52% for the Republicans in Congress and 44%-50% for the Democrats.One additional result finds that the impeachment controversy has drawn public attention, albeit not so much as in the case of President Bill Clinton 21 years ago. Sixty-two percent of Americans say they are following the impeachment proceedings against Trump very or somewhat closely. That compares to 75% in a Gallup poll just before the House impeached Clinton on Dec. 19, 1998.Bottom-line views differed on Clinton’s case: In an ABC News/Washington Post poll in 1998, just 33% said he should be impeached and removed from office, with 64% opposed. In a June 1974 Harris poll, 52% supported impeaching and removing President Richard Nixon. This rose to 64% if Congress determined that he was involved in the Watergate cover-up.MethodologyThis ABC News/Washington Post poll was conducted by landline and cellular telephone Dec. 10-15, 2019, in English and Spanish, among a random national sample of 1,003 adults. Results have a margin of sampling error of 3.5 points, including the design effect. Partisan divisions are 30%-26%-43%, Democrats-Republicans-independents.The survey was produced for ABC News by Langer Research Associates of New York, New York, with sampling, data collection and tabulation by SSRS of Glen Mills, Pennsylvania. See details on the survey’s methodology here.

Only 10% of US adults may have COVID-19 antibodies: Study
President Trump intends to pick Amy Coney Barrett for Supreme Court seat: Sources
Most say wait on Ginsburg seat, while opposing packing the court: Poll
Two former leaders of Holyoke Soldiers’ Home charged in COVID-19 deaths
Astronaut Terry Virts on managing isolation in space and during a pandemic
Racial disparities in alcohol and substance misuse