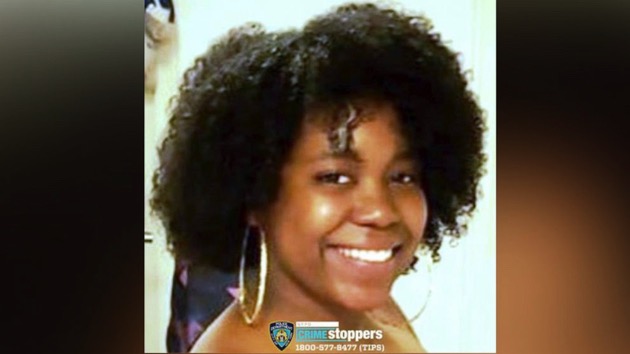 (NEW YORK) — A 16-year-old girl was kidnapped Monday night while she was walking with her mother in the Bronx, and police are now searching for four men believed to be involved.Karol Sanchez was walking along Eagle Avenue near East 156th Street at around 11:20 p.m. when two men stepped out of a vehicle, grabbed her and dragged her inside the car, according to the New York City Police Department.An Amber Alert was issued Tuesday in New York.Authorities fear she may be in “imminent danger of serious bodily harm and/or death,” according to the Amber Alert.Grainy surveillance video shows the apparent kidnapping and Sanchez’s mom can be seen in a struggle with one of the men before he pushes her to the ground.She was left at the scene and was not injured, according to police.

Seeking Immediate Information in regards to a kidnapping last night in the vicinity of Eagle Ave and E 156th St. 16 year old Karol Sanchez was walking with her mother when 4 men in a beige sedan forced her into their vehicle and fled the scene. Any info PLEASE 📞 1-800-577-TIPS pic.twitter.com/rgc8VWBgGv

The car could be seen fleeing east bound on East 156th Street.Two other men were in the car at the time of the kidnapping, police said.Authorities described the vehicle as a beige-colored four-door sedan.Sanchez is described as approximately 5’5″ and 150 lbs with short black hair. She was last seen wearing a dark blue short jacket, white sweater, blue jeans and black sneakers, police said.Anyone with information on the incident is asked to call the NYPD’s Crime Stoppers Hotline at 1-800-577-TIPS (8477) or for Spanish, 1-888-57-PISTA (74782). Copyright © 2019, ABC Audio. All rights reserved.

Watch the chilling first trailer for ‘The Craft’ reboot, ‘The Craft: Legacy’
Research shows substantial increase in COVID-19 rates in children, especially adolescents
Chrissy Teigen hospitalized for excessive bleeding complication during third pregnancy
Restaurants and bars now included in $3 trillion federal aid proposal
Get your first glimpse of Emma Corrin as Princess Diana on ‘The Crown’
Ilyasah Shabazz says ‘The Godfather of Harlem’ is “great,” but didn’t show the “depth” of her father Malcolm X