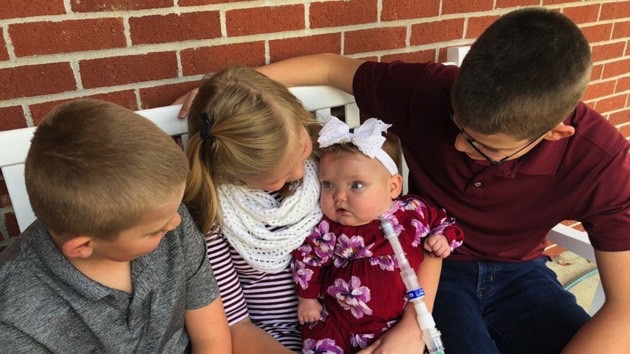 (COLUMBIA, Mo.) — A Missouri family is celebrating their daughter’s homecoming after she spent nearly nine months in the NICU.Joy Day was born Feb. 2, weighing 2 pounds, 1 ounce, at MU Women’s and Children’s Hospital in Columbia. She was released on Oct. 28.”She’s feisty and strong — she’s a fighter,” mom of four Amber Day told Good Morning America. “She’s got lot of spunk and smiles. Her name fits her. She’s been through so much.”Joy had many health scares and there were times when doctors didn’t think she’d survive.Last year, Amber and JP Day were living in the country of Jordan. They had been working overseas with churches and refugee outreach when they learned they were expecting their fourth child.Amber Day suffered several complications during the pregnancy, she said.”There was a blood clot, low-lying placenta, and when we went for the 18-week ultrasound to find out the sex, there was no fluid around her,” Day said, adding her water broke in December 2018, but doctors didn’t realize until later.Doctors in Jordan told Day she should return to the U.S. where ultrasound technology is more advanced, she said.The couple moved back to the states and Day was admitted to the hospital at 23 weeks pregnant in hopes she would make it to 32 weeks — allowing the baby to grow.But two weeks later, Day was forced to have an emergency C-section.”I remember thinking, ‘She’s too little to make it. It’s over,"” Day said. “It was a very hard few minutes.”Joy arrived and was intubated in MU Women’s and Children’s NICU. Her lungs were not properly developed, the hospital noted.At one point, Joy’s oxygen levels dropped at 30 percent, giving her parents a scare.”We made it through that night by God’s grace,” Day said. “One thing we had to learn about her is she will push herself.”Ten days after Joy’s birth, Day got to hold her for the first time.Now 10 months old, Joy is still on a ventilator and will soon begin speech, physical and occupational therapy.In November, Joy spent Thanksgiving at home and now, the Days are looking forward to Christmas with their family complete.”There’s times when it’s busy and hectic but it’s a blessing…to see her sleeping and smiling at her brothers and sister — we’re very thankful,” Day said.”She’s been a miracle.”