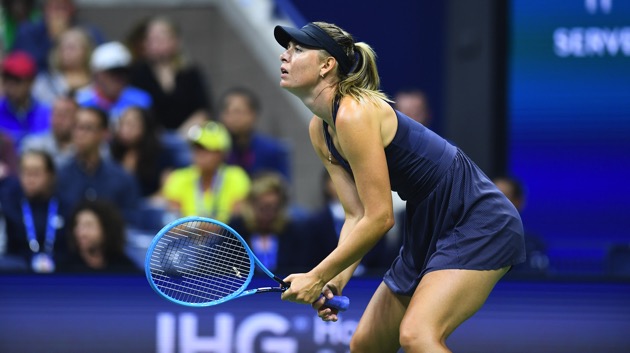 (NEW YORK) — Maria Sharapova always has a vision. Whether she’s on the tennis court, running her company, Sugarpova, or writing a bestselling book, the champion athlete has been successful by always staying focused on her end goal throughout every step of her journey.“I have a clear path of what I want to achieve in the end, and no matter where I am at, the beginning of it, the middle of it, I always go back to ‘What it was I thinking, what was my path? What was my thinking from the original starting point? And am I still on the same track?” Sharapova told ABC News’ Rebecca Jarvis on an episode of the “No Limits with Rebecca Jarvis” podcast.Her method has paid off. At 32-years-old, she has had more success than most people achieve over an entire lifetime. She became a professional tennis player at the age of 14, won Wimbledon only three years later, and has been ranked No. 1 in the world by the World Tennis Association five separate times. She is also a New York Times bestselling author and the founder and CEO of her premium candy line, Sugarpova.A common thread throughout these achievements is always her vision. Sharapova’s focus has been one of her biggest strengths since she started playing tennis as a child. She remembers at six years old being able to concentrate on hitting a tennis ball over and over again, in a way that stood out among the other children her age.Laying the foundation for her career from a young age was integral for her, and when she thinks about the worst advice she’s ever received, it was when people told her, “it’s not how you start, it’s how you finish.” She disagreed. For Sharapova, a strong and clear beginning is essential for a positive outcome, whether in sports or business.“The beginning is one of the most important parts of a journey … And so in my career, before you make that first step, you have to do so much due diligence. You have to put in so much work and effort, put in the right team, the frame of mind, and the hours of repetition in order to have a great beginning and the better the beginning, the better the end.”Hear more from Maria Sharapova on episode #134 of the “No Limits with Rebecca Jarvis” podcast.