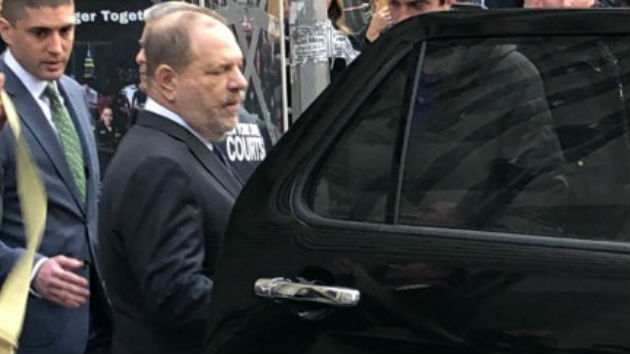 (NEW YORK) — While in a luxury wing of a New York City hospital following back surgery, disgraced movie mogul Harvey Weinstein gave an interview with the New York Post in which he touts himself as a champion of women.

The 67-year-old former studio head, who just last week agreed to a $47 million civil settlement of claims brought by a collection of sex assault accusers, says, “I feel like the forgotten man.”

Weinstein laments, “I made more movies directed by women and about women than any filmmaker, and I’m talking about 30 years ago. I’m not talking about now when it’s vogue. I did it first! I pioneered it!”

Weinstein brought up Gwyneth Patrow, who won an Oscar for Miramax’s 1998 film Shakespeare in Love. Paltrow isn’t one of the settlement accusers, but she’s accused Weinstein of luring her to his hotel room years ago and attempting to give her a massage.

“Gwyneth Paltrow in 2003 got $10 million to make a movie called View from the Top,” Weinstein said, touting his alleged involvement in getting her paid that much for a film that turned out to be a dud. “She was the highest-paid female actor in an independent film. Higher paid than all the men,” Weinstein boasted.

Actress Caitlin Dulany, one of the women who was involved in the civil suit against Weinstein that he and his production company settled last week, told ABC News on Sunday she was “sickened” by the comments in the interview.

“Harvey abused his power to assault women and destroy their careers, myself included,” Dulany said in a statement.

Weinstein is charged with, among other things, predatory sexual assault, criminal sex act and rape, stemming from alleged encounters with three different women. He has pleaded not guilty and denied non-consensual sex with any person.  The criminal case against him is expected to go to trial in January.

Get your first glimpse of Emma Corrin as Princess Diana on ‘The Crown’
Ilyasah Shabazz says ‘The Godfather of Harlem’ is “great,” but didn’t show the “depth” of her father Malcolm X
Shannen Doherty on her battle with stage 4 breast cancer: “I’ve got a lot of life in me”
‘Saved by the Bell’ reboot coming to Peacock on November 25
Presidential debate live updates: Trump vs. Biden and what you need to know ahead of first matchup
Trump, Biden compete for battleground Ohio ahead of first debate