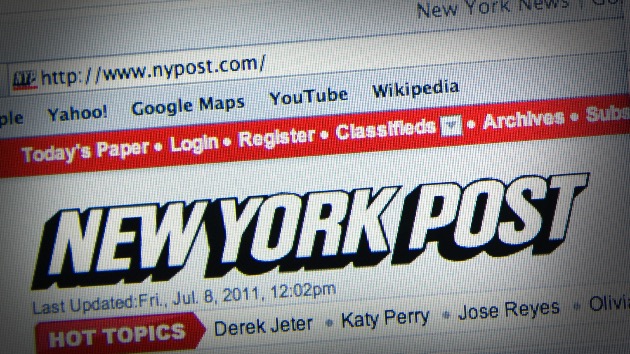 (NEW YORK) — Disgraced movie producer Harvey Weinstein bragged about how much he’s supported women in the film industry in a new interview published Sunday.Weinstein, who is facing a criminal trial over claims he raped a woman in a hotel room in 2013 and committed a forcible sex act on a second woman in 2006, told the New York Post in his first interview in a year that his work advocating for women as been forgotten in the wake of the allegations.”I feel like the forgotten man,’” he said in the interview given last week following a court appearance. “I made more movies directed by women and about women than any filmmaker, and I’m talking about 30 years ago. I’m not talking about now when it’s vogue. I did it first! I pioneered it!”He has pleaded not guilty to the criminal charges and contends he never had nonconsensual sex with any of the dozens of people in the movie industry who have accused him of misconduct.Weinstein, 67, gave the interview to dispel rumors he was playing up an injury for sympathy when he arrived at court with a walker, according to the Post. He underwent back surgery earlier this month to treat injuries from an August car accident.His bail was raised to $2 million at the Dec. 11 court appearance in Manhattan due to claims that he violated his ankle bracelet monitoring requirements dozens of times.The reactions to Weinstein’s claims in the new interview were swift.”Everything that Harvey Weinstein has done professionally for women is overshadowed by the serious allegations of sexual misconduct made by more than 60 women,” lawyer Gloria Allred, who represents a number of accusers, said in a statement to ABC News. “He states, ‘I feel like the forgotten man.’ He is not forgotten. He is a defendant in a high profile criminal case in which he is charged with serious crimes against women including rape, criminal sexual assault, and allegations of predatory sexual assault.””Gwyneth Paltrow in 2003 got $10 million to make a movie called View from the Top,” Weinstein told the Post, referring to a movie he produced at Miramax. “She was the highest-paid female actor in an independent film. Higher paid than all the men.”Paltrow has accused Weinstein of making unwanted advances toward her in the late-’90s.Actress Caitlin Dulany, one of the women who were involved in the civil suit Weinstein and his production company settled last week, told ABC News on Sunday she was “sickened” by the comments in the interview.”This is self-promotion gone terribly bad,” Dulany said in a statement. “Harvey abused his power to assault women and destroy their careers, myself included. To talk about his good deeds for Gwyneth Paltrow whom he harassed when she was 22 and whose career he held in his hands at that time is at the very core of this abuse of power.”Fellow accuser Katherine Kendall told ABC News in a statement, “He seems disturbingly out of touch. What he did shattered countless women’s lives. It’s time now to listen to the women, it’s time for us to reclaim our power.”The criminal case against Weinstein is expected to go forward in January.”The issues and charges in the criminal case should be the sole focus at this time,” Allred said. “Whatever he has done professionally for women may or may not be relevant at the time of sentencing if he is convicted. For now, any attempt by him to recast his tattered reputation or to appear to ask for sympathy will only serve to trigger many of those who allege that they are victims of Mr. Weinstein.”Douglas H. Wigdor, who represents multiple accusers against Weinstein, called the interview a “public relations stunt.” He has also criticized the recent civil suit’s settlement as not being enough for accusers and plans to continue pursuing the civil case.”One cannot feel sorry for Mr. Weinstein while he sits perched in an executive private hospital suite and asks New Yorkers to recognize his prior accomplishments which justifiably have been overshadowed by his horrific actions, his complete failure to accept responsibility, and his recent efforts to force survivors to accept an inadequate and paltry civil settlement,” Wigdor told ABC News.A list of 23 of his accusers, including Kendall and Dulany, as well as Hollywood stars Ashley Judd and Rose McGowan, signed a statement, saying in part, “He says in a new interview he doesn’t want to be forgotten. Well, he won’t be. He will be remembered as a sexual predator and an unrepentant abuser who took everything and deserves nothing. He will be remembered by the collective will of countless women who stood up and said enough.”