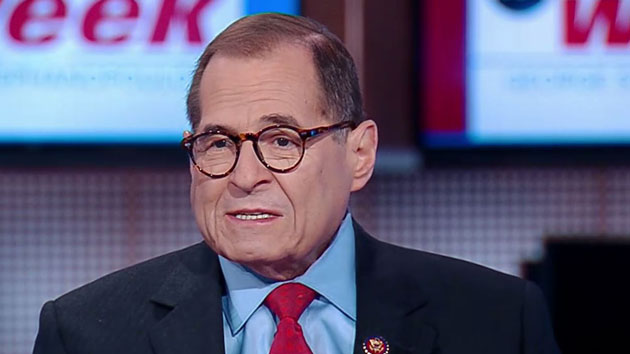 (WASHINGTON) — Two leading Democrats on Sunday defended the impeachment proceedings against President Donald Trump, saying the “integrity” of U.S. elections was at risk.”This president conspired, sought foreign interference in the 2016 election,” House Judiciary Committee Chairman Jerry Nadler said on ABC’s “This Week.” “He is openly seeking interference in the 2020 election and he poses a continuing threat to our national security and to the integrity of our elections to our democratic system itself. We cannot permit that to continue.”House Intelligence Committee Chairman Adam Schiff said the recent trip to Ukraine by Rudy Giuliani, the president’s personal lawyer, was troublesome.”It’s a clear and present danger, I think, to our democracy and not something we can turn away from because the Republicans in the House refuse to do their duty and continue to put the president above their constitutional obligation,” he said.

Rep. Adam Schiff: "I don't think any of us have any question that had Barack Obama engaged in the activity … every one of these Republicans would be voting to impeach him." "I hope to hell … if it were Barack Obama, I would vote to impeach him." https://t.co/P6iz1j1VA4 pic.twitter.com/xlVrk2I3qG

In a historic vote, the House Judiciary Committee voted on Friday along party lines to approve two articles of impeachment, one on abuse of power and the other on obstruction of Congress against the president. The articles of impeachment will be sent to the House Rules Committee, which will formalize the floor debate on the charges, and then to the full House of Representatives, with a vote expected Wednesday.Trump on Friday called the impeachment vote a “witch hunt,” “a sham” and a “hoax.””Nothing was done wrong. Zero was done wrong,” he said. “I think it’s a horrible thing to be using the tool of impeachment, which is supposed to be used in an emergency.”Schiff said on “This Week” that he was confident Democrats have the votes to impeach Trump, calling the president’s actions “far worse than anything Nixon did.”

.@gstephanopoulos: "If President Trump is overwhelmingly acquitted in the Senate, is that a failure?"House Intel Chair Adam Schiff: "No, it isn't a failure. At least it's not a failure in the sense of our constitutional duty in the House." https://t.co/P6iz1j1VA4 pic.twitter.com/G1oCNC46xu

He criticized Republicans for their partisan approach to the impeachment inquiry.“I don’t think any of us have any question that had Barack Obama engaged in the activity, the conduct which is the subject of these articles of impeachment, every one of these Republicans would be voting to impeach him,” Schiff said. “And you know something … if it were Barack Obama, I would vote to impeach him.”Both Nadler and Schiff also responded to Sen. Mitch McConnell and Sen. Lindsay Graham’s recent statements on their approach to an impeachment trial in the Senate.“Here you have the majority (leader) of the Senate, in effect the foreman of the jury, saying he’s going to work hand in glove with the defense attorney,” Nadler said of McConnell’s recent statement saying he will coordinate with the White House counsel’s office. “That’s in violation of the oath that they’re about to take and it’s a complete subversion of the constitutional scheme.”Schiff said McConnell and Graham don’t want Americans to learn the facts.“I hope that the senators will insist on getting the documents, on hearing from the witnesses, on making up their own mind even if there are some senators who have decided out of their blind allegiance to this president that he can do nothing wrong,” he said.Nadler also responded to reports that moderate Rep. Jeff Van Drew, D-N.J., planned to switch parties because of his opposition to the impeachment inquiry, with Nadler saying that Van Drew was reacting to “public polling that shows he can’t get renominated” as a Democrat.“This is not political. We should not be looking at those things,” he said. “This is the defense of our democracy.” Copyright © 2019, ABC Audio. All rights reserved.