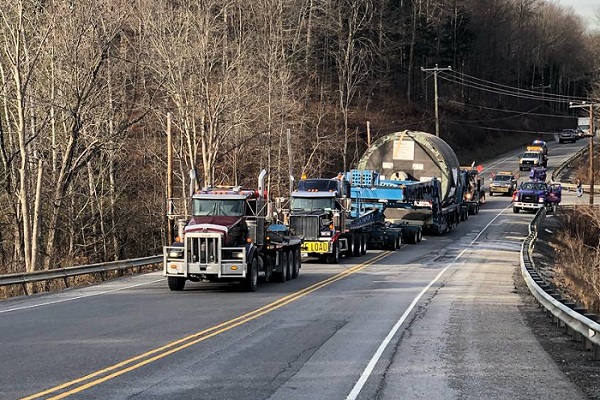 Clearfield, PA – The Pennsylvania Department of Transportation (PennDOT) is reminding motorists to be alert for traffic impacts as the Yankee Dryer super load approaches Philipsburg.

Currently, PennDOT anticipates the super load will move through the Philipsburg area the morning of Saturday, December 14. Beginning at 7:00 A.M., the load will continue along Route 322 eastbound from the Bigler intersection. It is expected to reach Philipsburg between 9:00 A.M. and 10:00 A.M.

Drivers will need to remain alert for the slow-moving operation, which will travel at speeds slower than 15 miles-per-hour. Drivers in the Philipsburg area are encouraged to use alternate routes.

After leaving Philipsburg, the dryer will continue along Route 322 east, exiting at Port Matilda to follow Route 3040/Alternate Route 220.

Currently, PennDOT expects the super load to move onto Interstate 80 at the Milesburg interchange on Sunday, December 15.

The super load left the Port of Erie Thursday, December 5, and has traversed portions of Erie, Crawford, Venango, Clarion, Forest, Elk, and Clearfield counties. The dryer is excepted to arrive in Lock Haven early next week.

A complete list of the planned route from Erie to Lock Haven was included in the initial release distributed by PennDOT on Wednesday, December 4, which can be found at
www.penndot.gov/district2

Flaggers will be positioned at specific locations and intersections along the super load route to assist with traffic control during counterflow movements.