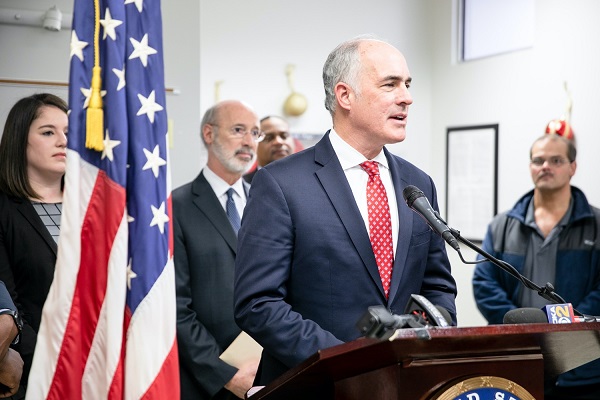 Pittsburgh, PA – Governor Tom Wolf and U.S. Senator Bob Casey were in Pittsburgh on Friday to urge Pennsylvanians to sign up for health care under the Affordable Care Act at HealthCare.gov before enrollment ends on Sunday, Dec. 15.

They were joined by Pennsylvania Insurance Commissioner Jessica Altman in delivering a message to look to the ACA for multiple plan options, many of which include subsidies.

“As we near the conclusion of this year’s open enrollment period for plans through the ACA, I encourage you to enroll because I want all Pennsylvanians to be healthy,” Gov Wolf said. “If you or family members need health insurance, if you want to make modifications to your current plan through HealthCare.gov, or if you want to price shop insurance plans, now is the time.”

Open enrollment for 2020 ends on Sunday, Dec. 15. The Pennsylvania Insurance Department has a free-to-use plan comparison tool at pa.checkbookhealth.org and Pennsylvania has more options than ever for health insurance. Highmark expanded into 14 new counties, including two counties that previously only had one insurer. And there is one new provider, Oscar Health, which is offering insurance in five counties.

Senator Casey focused on the threat to the ACA by Congressional Republicans and the need to ensure we have a way for every citizen to have access to affordable health care.

“The Texas v. U.S. lawsuit could destroy the protections provided by the Affordable Care Act,” U.S. Senator Bob Casey said. “If Congressional Republicans say they’re in favor of preserving protections for people with pre-existing conditions, then they should march into the Supreme Court of the United States and file an amicus brief, or get on the record to clearly state that they’re against this lawsuit. Because if it prevails, consumer protections for pre-existing conditions will be wiped out. Last time I checked, there’s not a single Republican in Washington who will do that. So, when we say Congressional Republicans and the Trump Administration are trying to ‘destroy’ health care coverage, we chose that verb carefully. This lawsuit would destroy the Affordable Care Act and completely wipe out Medicaid Expansion, which has helped so many people in Pennsylvania.”

“Despite the opposition and hurdles, the Affordable Care Act has significantly changed the landscape of healthcare in this country and it is working in Pennsylvania,” Insurance Commissioner Altman said. “The insurance department remains committed to protecting and educating consumers. In these last days of open enrollment, I strongly encourage Pennsylvanians to compare plans, because 80 percent of consumers who purchase coverage on the exchange receive financial assistance.”

“Increasing Pennsylvania’s offerings of health insurance is incredibly important,” Gov. Wolf said. “This is the last year Pennsylvanians will shop for Affordable Care Act plans on HealthCare.gov. Starting next year, Pennsylvania will operate its own health insurance marketplace that will help us reduce the cost of individual plans.”

The state-based health insurance marketplace, which Wolf signed into law in July, will use federal subsidies collected through the Affordable Care Act to cover its costs. The reduction in costs of running the marketplace instead of outsourcing it to the federal government will allow for the creation of a re-insurance fund that will pay some of the highest costs for insured individuals.

Firearms stolen from unoccupied residence in Jefferson County
Apply now for up to 6 weeks of Lost Wages Assistance Program
Firearms permit expirations extended until end of year
DEP offers $400,000 in grants for environmental education projects
Experts give advice on where to see the best fall foliage during autumn in PA
TikTok, WeChat to be banned from US app stores starting Sunday