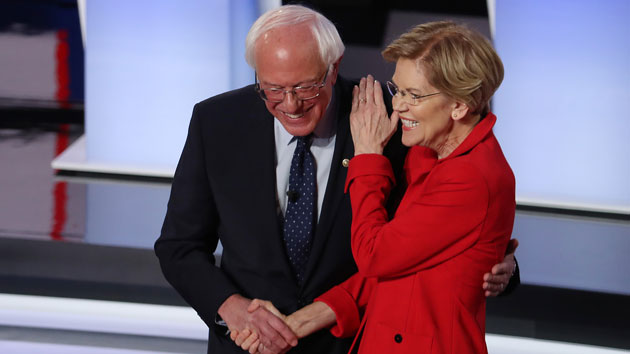 (LOS ANGELES) —  Less than a week before the last Democratic primary debate of 2019, all seven of the presidential candidates, including polling front-runners, former Vice President Joe Biden, Massachusetts Sen. Elizabeth Warren and Vermont Sen. Bernie Sanders, who are qualified and are anticipated to appear on the stage in Los Angeles, announced they “won’t cross the union’s picket line” to participate in the upcoming matchup.Warren wrote on Twitter, “[email protected] is fighting for better wages and benefits—and I stand with them. The DNC should find a solution that lives up to our party’s commitment to fight for working people. I will not cross the union’s picket line even if it means missing the debate.”

.@UniteHere11 is fighting for better wages and benefits—and I stand with them. The DNC should find a solution that lives up to our party’s commitment to fight for working people. I will not cross the union’s picket line even if it means missing the debate.

The tweet, coupled with similar statements from Biden, Sanders, billionaire Tom Steyer, South Bend, Indiana, Mayor Pete Buttigieg, entrepreneur Andrew Yang and Minnesota Sen. Amy Klobuchar on Twitter, injected a fresh round of uncertainty and turmoil around which candidates will participate in the sixth debate, which is slated for Thursday, Dec. 19 at Loyola Marymount University in Los Angeles, and co-hosted by PBS NewsHour and POLITICO.

I won’t be crossing a picket line. We’ve got to stand together with @UniteHere11 for affordable health care and fair wages. A job is about more than just a paycheck. It’s about dignity. https://t.co/nn4tb5q8wt

A Yang’s campaign underscored their commitment to the union, telling ABC News that the entrepreneur will participate in the debate if the dispute gets settled or a new venue is chosen.A spokesperson for Sanders told ABC News “he will not cross a picket line to attend the debate,” before clarifying that if the labor dispute is ongoing, he will not participate in the debate.The labor vote is a key bloc of the Democratic coalition with the candidates frequently participating in rallies, events and forums hosted by unions in an effort to court their vote.The seven candidates who are qualified for the upcoming debate and scheduled to appear are Biden, Buttigieg, Klobuchar, Steyer, Sanders, Warren and Yang.The debate is a crucial opportunity for those seven contenders to spar over the issues before a national audience, ahead of the primary season entering the final month before early voting begins in February. The announcements from the candidates come only hours before the DNC is expected to formally release who is participating in the debate.Earlier this week, after Yang qualified for the debate as the only candidate of color, he brought the total number of qualifying candidates who have crossed both the polling and grassroots donor hurdles up to seven for December’s matchup, according to an ABC News’ analysis.Behind the picket line is UNITE HERE Local 11, a labor union representing 150 workers in the food services industry, including cooks, dishwashers, cashiers, and servers, who are contracted by the company Sodexo — a global services company. The union workers prepare and serve meals at Loyola Marymount.The union sent a letter, obtained by ABC News, to the presidential contenders on Friday, informing the Democrats of the labor dispute.”We want to make sure you are aware that there is a labor dispute involving our union on that campus,” the letter reads. “While we remain hopeful that the labor dispute can be resolved before next Thursday, we want to be clear that if the situation remains unresolved there could be picketing on the evening of the debate. Any assistance you can provide in resolving this dispute would be greatly appreciated.”The letter is signed by three co-presidents of UNITE HERE Local 11: Ada Briceno, Susan Minato, and Kurt Petersen.The Democratic National Committee and Loyola Marymount were not made aware of the issue until after the letter was sent, a source familiar with negotiations told ABC News.A source said the DNC is looking into the matter.Local 11 has been in negotiations with Sodexo since March over a collective bargaining agreement, as they seek to negotiate better contracts, including better wages and health care benefits, but have yet to reach a resolution. Workers, along with students, have been picketing on campus since November, according to the union, after Sodexo abruptly canceled scheduled contract negotiations last week.”We had hoped that workers would have a contract with wages and affordable health insurance before the debate next week. Instead, workers will be picketing when the candidates come to campus,” Minato said in a statement.This is not the first union-related hurdle the DNC has faced for the site of the December debate.In early November, the DNC announced it was no longer hosting the primary debate at the University of California, Los Angeles, the original location of the match-up, over a labor dispute with a local union.”In response to concerns raised by the local organized labor community in Los Angeles, we have asked our media partners to seek an alternative site for the December debate. We will be in touch with more information when it is available,” the DNC wrote in an email informing the campaigns.The debate was moved to Loyola Marymount only days later, in an announcement by the DNC.