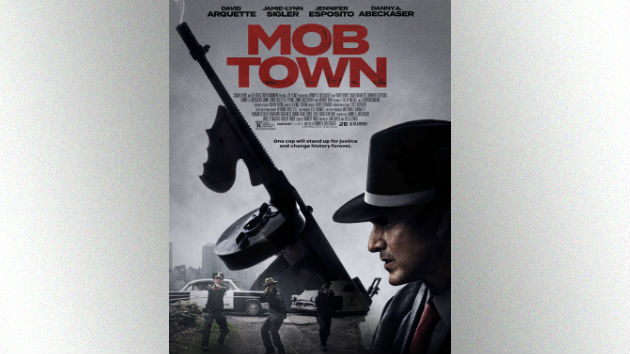 (NEW YORK) — Former Blue Bloods cop Jennifer Esposito shows a different side of the criminal underworld in the new drama Mob Town, which debuts in theaters and video-on-demand today.

The actress is from New York, but even the Brooklyn native was surprised to learn the plot of the period piece was based on actual events: the meeting of every Mafia “family” in the U.S. in Apalachin, New York.

The summit of the crime families took place at the vacation home of mobster Joseph “Joe the Barber” Barbara, on November 14, 1957.

In the film, David Arquette plays a policeman in the sleepy town who gets wind something big is about to go down, but it seems only his lifelong friend, played by Esposito, is actually willing to listen to him.

“I had never heard about this before, and it’s really a great story,” she tells ABC Audio. “[Y]ou know, all these mobsters going up to Apalachin and and this one lone police officer figuring this out, that there was something more to this.”

The actress and author explains, “I love true stories…It was such an interesting story, I couldn’t believe no one had done it before.”

The movie also stars Robert Davi as Barbara, and The Sopranos alum Jamie-Lynn Sigler.Esposito also stars on Amazon Prime’s acclaimed superhero show The Boys, and while she wouldn’t give any spoilers about it, she noted that fans will be “wonderfully surprised” at where her character goes in season 2 — the teaser for which recently debuted.

The sneak peek, pardon pun, pulls no punches — seeing as it features at least one head being punched into oblivion, and a brain being torn apart. “No,” Esposito laughs. “There’s nothing subtle about the show.”

There’s no release date yet for the second season.