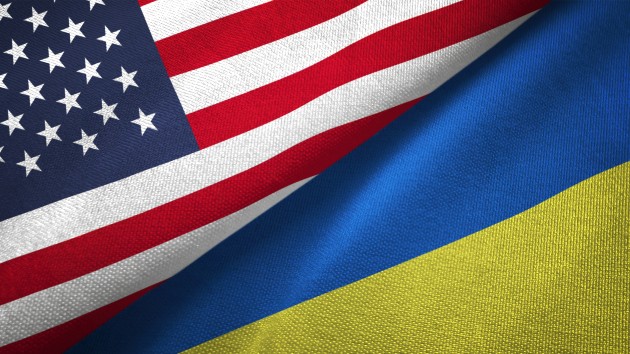 (WASHINGTON) — The Trump administration released heavily redacted documents Thursday evening that, without the redactions, would have been the first communications revealed between government agencies regarding aid money to Ukraine being held up.The Freedom of Information Act request, filed by the Center for Public Integrity, a D.C.-based nonprofit group that specializes in investigative reporting, was first granted by a federal judge last month. That order required the Department of Defense and the Office of Management and Budget (OMB) to release documents to that group from April of this year regarding the Ukraine aid.The nearly $400 million military assistance to Ukraine, which was held up just days before the infamous July 25 call between President Donald Trump and Ukraine President Volodymyr Zelenskiy, has been at the center of the House impeachment inquiry against Trump, as House investigators zeroed in on whether the president withheld the aid in an effort to pressure Zelenskiy’s new administration into investigating Trump’s political rival, former Vice President Joe Biden, and his son.”We are deeply disappointed that the public won’t have access to this important information at the heart of the impeachment process,” said Susan Smith Richardson, CEO of the Center for Public Integrity. “But we will continue to fight to ensure that the documents see the light of day.”In the documents released Thursday, there are conversations over email between Elaine McCusker, the deputy comptroller at the Department of Defense, and Michael Duffey from OMB regarding the Ukraine aid, but the conversations are mostly redacted. The aides did send each other press reports from August when the Ukraine aid being held up was first discovered. Duffey was subpoenaed by the House Intelligence Committee for testimony during its impeachment inquiries, but he followed most White House officials and did not comply with that request.The documents also include spreadsheets of financial figures that appear to be related to Ukraine based on notes.It was first revealed during a July 18 meeting between the OMB and other officials that the White House had decided to withhold the Ukraine aid. Acting Chief of Staff Mick Mulvaney said the move was at the direction of the president.National Security Council’s Ukraine expert, Alex Vindman, and Vice President Mike Pence’s national security aide, Jennifer Williams, testified before Congress that they first learned of the hold-up as early as July 3.The possibility of a hold up when it was announced on July 18 immediately sparked confusion and concerns from national security officials and diplomats, prompting a series of NSC-led inter-agency meetings, during which officials came to a unanimous conclusion that the security assistance should be resumed, according to several witnesses’ testimony in the House impeachment inquiry.Laura Cooper, the deputy assistant secretary of defense for Russia, Ukraine and Eurasia, told House investigators that aides at the Pentagon were confused by the hold on the financial aid because the Defense Department had certified the financial transfer in May when Ukraine had met the necessary anti-corruption benchmarks. She said senior aides were unclear how everything would “play out” legally.”So the comments in the room at the deputies’ level reflected a sense that there was not an understanding of how this could legally play out,” she told Congress, according to the transcript of her interview behind closed doors before the public hearings. “And at that meeting, the deputies agreed to look into the legalities and to look at what was possible.”In September, shortly after House committees launched a wide-ranging investigation into whistleblower allegations that Trump, his personal attorney Rudy Giuliani and others attempted to pressure Zelenskiy’s government to dig into the president’s political rival, the Ukraine aid was suddenly released.The president and his allies have repeatedly refuted the idea of a quid pro quo, but Mulvaney in October admitted there was one, telling ABC News’ Chief White House Correspondent Jonathan Karl during a White House briefing that Trump had ordered him to hold up the military aid in part to pressure Ukraine to launch an investigation of Democrats.Much of the president’s closest allies’ accounts of how the Ukraine assistance was held up and eventually released are still shrouded in mystery as the White House, the State Department and the Defense Department have directed their top officials to not cooperate with the House impeachment inquiry. Even for those who went around their agencies’ direction and complied with House subpoenas, the administration has blocked them from getting access to their official records to help their testimony.House Democrats in their articles of impeachment revealed on Tuesday included Trump’s order to direct the White House and other executive branch agencies to defy congressional subpoenas as part of the arguments in support of the president’s obstruction of Congress.But more of those documents are expected to see light as part of media outlets and watchdog groups’ open records requests.The Center for Public Integrity is expected to receive more records from the Defense Department and OMB by Dec. 20 as part of its records request, and the Washington-based watchdog group American Oversight is also expected to receive some records related to Ukraine assistance from the Defense Department and the OMB.Copyright © 2019, ABC Audio. All rights reserved.

‘Black Equals Beauty’: Queen Latifah to produce series highlighting Black women’s influence on American culture
House passes bill to ban doping horses on race day
Restaurants and bars now included in $3 trillion federal aid proposal
Get your first glimpse of Emma Corrin as Princess Diana on ‘The Crown’
Ilyasah Shabazz says ‘The Godfather of Harlem’ is “great,” but didn’t show the “depth” of her father Malcolm X
Shannen Doherty on her battle with stage 4 breast cancer: “I’ve got a lot of life in me”