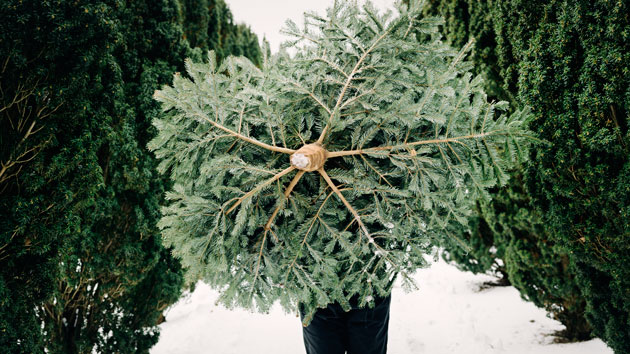 (ERIE COUNTY, Ohio) — What looks like a small little pinecone on your Christmas tree may actually be something you don’t want in your house.The state of Ohio put out an interesting warning for the holiday season about potential insects that could be waiting to hatch inside your home.Erie County wrote on Facebook, “PSA: If you happen to see a walnut sized/shaped egg mass, on your Christmas tree, don’t fret, clip the branch and put it in your garden. These are 100-200 preying mantis eggs!”And for those who don’t believe it … a Virginia veterinarian experienced a nightmare last Christmas when dozens of praying mantises roamed her home.More than 100 praying mantises hatched from an egg case hidden under the branches of the Christmas tree Springfield resident Molly Kreuze bought for the holiday season, ABC Washington D.C. affiliate WJLA reported.

The bugs moved freely through the house, “crawling on the walls, crawling on the ceilings,” Kreuze told the station, adding that they gravitated toward light. Video taken by WJLA showed the insects hanging from the ceiling and crawling on the windows.This year, Kreuze planned on buying a fake one, she told the local station.So if you haven’t taken a close look at your tree, double check behind the bigger ornaments just in case! Copyright © 2019, ABC Audio. All rights reserved.

Oregon reports highest daily COVID-19 case total, may be linked to wildfires
Only 10% of US adults may have COVID-19 antibodies: Study
A whole new world: Disney+ to host social distance drive-in featuring Disney favorites
Most say wait on Ginsburg seat, while opposing packing the court: Poll
Black flight attendant and white airline CEO reunite after emotional talk on race
Astronaut Terry Virts on managing isolation in space and during a pandemic