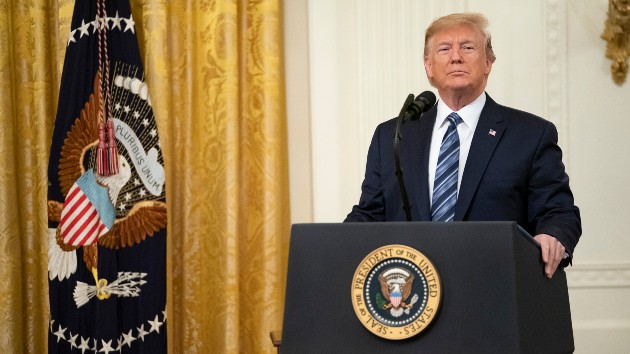 (WASHINGTON) — President Donald Trump tweeted Thursday, telling Greta Thunberg, the 16-year-old Swedish climate activist, to “chill.”Trump wrote “so ridiculous” in response to a tweet from actress and producer Roma Downey congratulating Thunberg on being named Time magazine’s 2019 person of the year.”Greta must work on her Anger Management problem, then go to a good old fashioned movie with a friend!” the president continued. “Chill Greta, Chill!”

So ridiculous. Greta must work on her Anger Management problem, then go to a good old fashioned movie with a friend! Chill Greta, Chill! https://t.co/M8ZtS8okzE

Seemingly in response to his tweet, Thunberg changed her Twitter bio to read: “A teenager working on her anger management problem. Currently chilling and watching a good old fashioned movie with a friend.”Trump’s tweet comes one day after Time magazine’s announcement of Thunberg as Person of the Year, which represents the person or group, idea or object, that “most affected the news and our lives, for good or ill, and embodied what was important about the year, for better or for worse.”Time Editor-in-Chief Edward Felsenthal said while making the announcement that Thunberg “represents a broader generational shift in the culture that we’re seeing from the campuses of Hong Kong to the protests in Chile to Parkland, Florida, where the students marched against gun violence, where young people are demanding change urgently.”The president was a finalist for the title this year and has demonstrated a persistent interest in who gets the title each year. He was selected as Person of the Year in 2016.