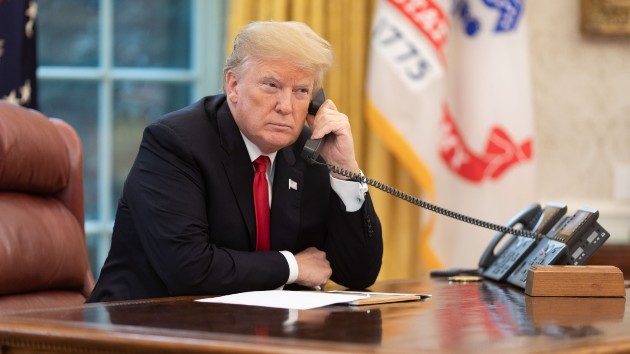 (WASHINGTON) — Gearing up for an impeachment trial in the Senate, President Donald Trump and his top advisers are considering expanding his legal team and bringing on controversial attorney and professor Alan Dershowitz, multiple sources told ABC News.Dershowitz attended an event Wednesday at the White House and was asked to speak briefly by the president ahead of signing an executive order on anti-Semitism.”I have advocated that there needs to be one other attorney that’s added to the mix for the president, and that is Alan Dershowitz,” Congressman Mark Meadows, R-N.C., a Trump confidant, told the House Freedom Caucus podcast on Wednesday. “I think he’d be great to come in, get Alan Dershowitz in to be part of that defense team.”Dershowitz, who was often called upon by the White House and the president’s attorneys to appear on television during the Mueller investigation, has been in the headlines due to his ties to now-deceased accused child trafficker Jeffrey Epstein. Dershowitz was a member of a star legal team that represented Epstein during his multiple investigations beginning in the mid 2000s.Virginia Roberts Giuffre has alleged in courts documents that she was lent out to Dershowitz for sex by Epstein. Dershowitz has vehemently denied those accusations.As the White House sets its sights on an impeachment trial, questions have mounted about who would lead the president’s defense.One of the president’s personal attorneys, Rudy Giuliani, is a focus of the impeachment probe and work he did as it relates to Ukraine. Separately, Giuliani’s relationship with two Ukraine-born men — Lev Parnas and Igor Fruman, who were indicted this fall by federal prosecutors — is the subject of a criminal investigation in the Southern District of New York, according to sources familiar with the matter.In an op-ed published earlier this week, Dershowitz wrote that the two articles of impeachment proposed by the House Judiciary committee failed to meet the standard in his opinion.

“Both are so vague and open ended that they could be applied in partisan fashion by a majority of the House against almost any president from the opposing party,” he wrote.Dershowitz, a longtime professor at Harvard University, most notably won the appeal of Claus von Bülow’s 1982 conviction for the attempted murder of his wife, Sunny. He was also part of the legal “Dream Team” for O.J. Simpson’s murder trial. Copyright © 2019, ABC Audio. All rights reserved.

Idris Elba, Angela Bassett and others to help launch new opportunities for diverse first-time filmmakers
Mary Trump alleges in lawsuit her family ‘fleeced’ her out of millions of dollars
NASA pledges to land 1st woman on moon by 2024
Coronavirus live updates: CDC forecasts up to 226K US deaths by mid-October
McConnell pushes back at Trump’s refusal to commit to peaceful transfer of power if he loses
Trump booed while visiting Justice Ruth Bader Ginsburg’s casket at Supreme Court