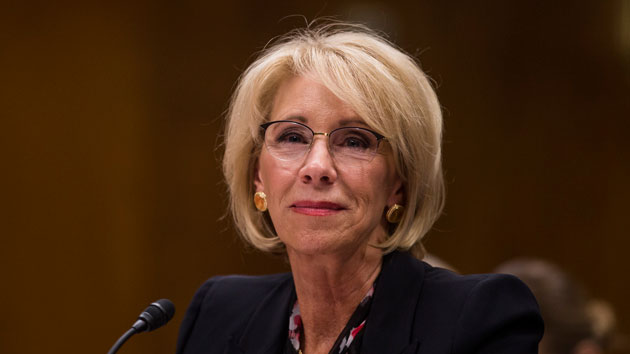 (WASHINGTON) — Education Secretary Betsy DeVos faced intense scrutiny on Wednesday as she appeared before the House Education and Labor committee to defend her handling of a student debt relief policy.The policy, called “Borrower’s Defense,” is designed to offer debt relief to students who claim to have been defrauded by certain for-profit institutions.DeVos argues that not all claims should be approved, stating in her written testimony that, “if claims are false, or students did not suffer financial harm, then hardworking taxpayers should not pay their student loans for them. It’s a matter of fairness.”Chairman Bobby Scott, D-Va., in his opening statement, said DeVos’ “refusal to process claims is inflicting serious harm on the students you have a duty serve.””While the Department has been searching for a legal method of shortchanging defrauded borrowers, those defrauded borrowers have been left with mountains of debt, worthless degrees, and none of the job opportunities they were promised,” Scott’s opening statement said.He added, “In many cases, they have been unable to go back to school, start a family, and move on with their lives.”Scott also accused the Education Department of “illegally” collecting on “45,000 borrowers who are waiting for you to take action on their claims.””In some cases, these individuals had their wages and tax returns garnished by the very government that was supposed to be providing them relief,” Scott said.Republicans, however, defended DeVos and the department’s management of the claims.”Claims that Secretary DeVos is unnecessarily or purposely delaying relief for these borrowers is false,” Ranking member Virginia Foxx of North Carolina said in her opening statement.”Secretary DeVos is putting reforms in place that will help defrauded students navigate the process of getting the loan relief they deserve,” she said. “And Committee Republicans are supportive of these efforts. Defrauded students who have been financially harmed should get relief.”But the Republican defense didn’t stop Democrats from aggressively going after DeVos and her leadership at the department.At one point during the hearing, Democratic Rep. Frederica Wilson of Florida asked DeVos, “Why has every decision you’ve made harmed students instead of empowering them?”Wilson said that although in the past she has often disagreed with her Republican counterparts over their approach to education, she has “never, not one time, believed they were out to destroy public education, until I met you,” speaking to the secretary.Wilson continued to condemn DeVos’ leadership, “You are the most unpopular person in our government, millions will register to vote in 2020, many will vote to remove you, more than to remove the president.”Following Wilson’s remarks, Foxx said the claim that DeVos is trying to “destroy public education” was “going too far.””That kind of comment cannot stand in this committee,” Foxx said.In her written testimony, DeVos said that she agreed that there is a backlog of claims at Federal Student Aid.”To say that I am frustrated by that backlog is an understatement,” she said in her written testimony. “But rather than focus on why there is a backlog, too many have instead focused on creating a media circus.” Copyright © 2019, ABC Audio. All rights reserved.